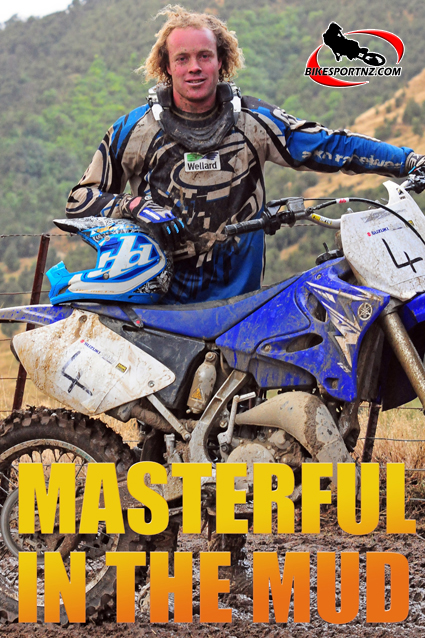 It now seems even less likely than before that a winner can be predicted, even after three-quarters of the Suzuki-sponsored series has now been completed, as the racing turned up a few surprise results at a damp and muddy round three near Martinborough on Saturday.

But Reeves finished an unaccustomed fifth on Saturday, O’Dea was third and Greenslade slid home in eighth.

So, at the end of a soggy day of drama, Reeves’ lead had been trimmed to five points and it was O’Dea who was up to second position in the series rankings.

Despite his eighth placing at Martinborough, Greenslade remains a threat for the New Zealand title, now third in the standings but just another five points behind O’Dea.

With only three of the four rounds to count towards the championship and riders expected to discard their worst score, the calculators had to come out at the end of Saturday’s racing.

The ‘discard’ rule means these three riders are all on target for the outright win, with Huntly’s Michael Vining (Suzuki RM-Z450) also in the mix for a podium finish.

Saturday’s race was won easily by Mokau’s Adrian Smith (Yamaha YZ125) with Whitby’s Rory Mead (Yamaha YZ250F) taking the runner-up spot, but they both skipped round one because of overseas racing commitments and have no chance of taking the national title.

It was a virtuoso performance from Smith (pictured above) as he led almost from start to finish, scooting through to take the lead after the first couple of kilometres and never looking back.

He was the only rider to complete six laps in the three hours.

“It was pretty slippery, but I think that suited the little 125cc bike,” said Smith afterwards.

“There were big bottlenecks (of riders stuck) on the steep hills but I managed to find a way through each lap.”

The fourth and final round is set for Christchurch in a fortnight (on May 15).