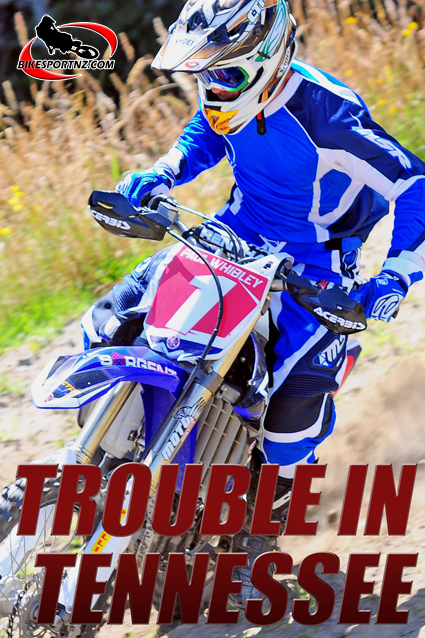 It was another luckless outing on the race track for Kiwi hero Paul Whibley in the United States at the weekend.

The Yamaha ace managed an unaccustomed eighth overall at round five of the US Grand National Cross-country Championships at Hurricane Mills, Tennessee, the event won instead by his own Yamaha team-mate, American Charlie Mullins.

The chance now of the Pahiatua man successfully defending his US title seems more and more remote by the week as he has yet to record a win in the 2010 series while his chief rivals are meanwhile continuing to pad out their points advantage over the luckless Kiwi champion.

“The first half mile down and around the pits was pretty sloppy from the rain on Saturday, but after we crossed the road and into the woods we were back into the traditional Lorretta Lynn’s rock,” said Whibley.

“The woods were in pretty good shape as most of the rain had run-off and any excess had been splashed off by the morning race. Although most of the trail was pretty beat up, a 3-mile section of fresh single track was a welcome relief.

“I soon realised I had a problem as I went to readjust my clutch after the start and discovered the adjuster was jammed with almost zero free play.

“I was having a difficult time reaching the lever and began to tighten up as I struggled to deal with the issue. I continued to lead the first lap but the lack of control caused me to clip a tree mid way through the second lap, going down and handing the lead over to the hungry pack.

“I was signalled into the pits at the completion of the lap for repairs. The perch was replaced but took several minutes and by the time I rolled back out onto the track the leaders were long gone. I continued to make laps and picked off a few riders, eventually moving up to 8th in the XC1 class.”

Mullins won the round five event at the weekend, ending the win streak of Australian Suzuki rider Josh Strang.

Mullins and Strang ran head-to-head at the front of the field with the American rider eventually holding on for the win.

Strang pushed Mullins for the final few kilometres, and things got even more exciting when Mullins bobbled within sight of the finish, however, the North Carolinian native was able to hold on to the lead and got to the finish five seconds ahead of Strang.

“We had a good race and I just didn’t give up,” said Mullins. “In the first few races I just made too many mistakes. And at this race I just calmed down and rode mistake-free and that was the difference.”

Whibley again had no luck – determined to put his campaign back on track and move up from third in the series standings, he had grabbed the holeshot at the start but was later forced to hand over his lead when he damaged his clutch lever. He was fortunate to be able to salvage an eighth placing at the finish.

Despite finishing runner-up in Tennessee, Strang still holds a 37-point lead over Mullins in the series standings, with defending champion Whibley dropping from third to fourth overall.