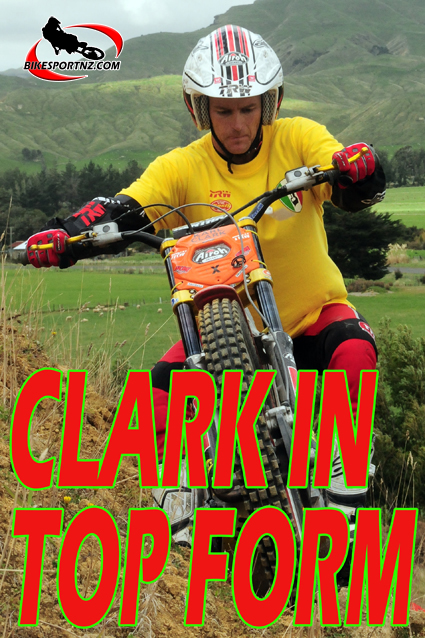 Rounds one and two of the South Island Trials Championships were staged over the weekend, with Motueka’s Karl Clark dominating both days.

Both days were held at one property near Havelock.

Everyone was a little unsure of the conditions on Saturday due to the overnight rain, but Sunday sure made up for it with the sunshine.

Expert rider Clark showed good form to achieve two wins over the two days, beating his opposition by 40 points over the weekend.

Jason Baker, a 10-times South Island Champion from Rarangi, had a second on day one and a third on day three but giving him second place overall.

Nelson’s Nick Oliver also had a third and a well-earned second on Sunday, taking out third place overall.

In the A Grade class experienced Steve Oliver, also from Nelson, took out the overall win for the weekend winning both days. Wellington’s Carl Robson made the trip down and he showed he was on track for the year ahead coming in second place for the weekend.

Dunedin’s Blake Fox, on his 125cc Gas Gas, showed he was also on form, this was the first time that Blake competed in A Grade and by his overall third placing he is going to be one to watch.

In the Intermediate grade, Tauranga’s Warwick Merriman, had a tough battle over the weekend, he won the first day but was tied on first place with two other riders, Paul Jackson and John Regan and all of these riders had to be counted back on cleans and the overall first placing was Merriman who took out the over all first placing for the weekend.

Jackson finished on second and Regan on third.

Presidents was a close grade but Nigel Shilton took out first place, Keith Ruthven in second and Graeme Hibbs in third place. Junior rider Brady Inwood, from Motueka, showed that he was the up and coming rider taking out first place overall for the weekend and David Trewin coming in second.