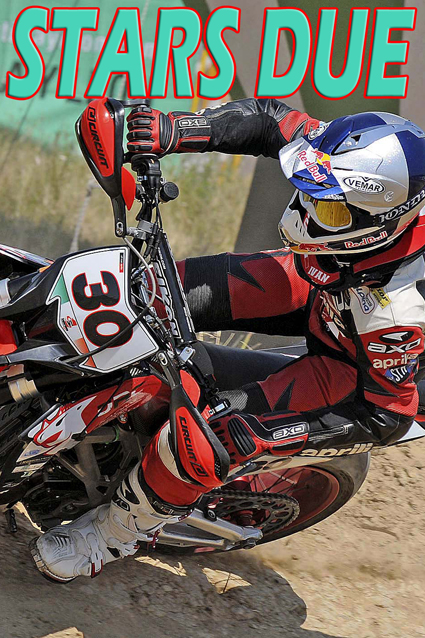 Wanganui’s famous Cemetery Circuit will rock to the sound of Supermoto on Boxing Day with the confirmed entry of multi-Supermoto champion Ivan Lazzarini.

Lazzarini is rated as one of the fastest Supermoto riders in the world having won five Italian titles, and most recently earned a Gold Medal win at the prestigious X-Games Supermoto at Los Angeles in August. A race where US-based Kiwi Daryl Atkins finished a credible 14th.

Atkins dominated the Supermoto class last year at Wanganui and with Lazzarini’s pedigree, Atkins may meet his match at the Cemetery Circuit. Either way, the crowd wins as they witness two of the worlds fastest Supermoto riders clash handlebars and slide sideways when they battle for the win.

The Italian holds a narrow points lead for second position in the World Supermoto S1 title chase heading into the final round at Catalunya, Spain, this weekend.

Ivan Lazzarini will compete in all three rounds of the Suzuki Tri-Series beginning at Manfield on December 19, followed by Wanganui’s Cemetery Circuit on December 26, with the final round staged at Taupo motorsport Park on December 28.

The 2009 Suzuki International Tri-Series will be the biggest motorcycle series held in New Zealand for many years with record entries in all classes competing for $32,000 total prizemoney. International riders include 12 Australians, three British riders, an Irishman, a Canadian, and Italian Ivan Lazzarini.

Multi NZ, Australian and South African champion Dave Hiscock is returning to New Zealand to be reunited with his Steve Roberts-built ‘Plastic Fantastic’ to ride demonstration laps at Wanganui. Hiscock’s first ride on the bike since Boxing Day 1982.