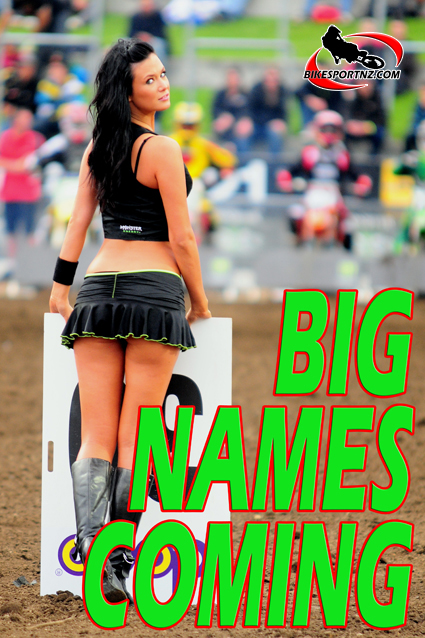 Two top-10 riders in the world have been confirmed for round seven of the Monster Energy Super X in Brisbane next weekend.

Global Action Sports has confirmed that Americans Josh Grant and Davi Millsaps will be flying down under to compete in the highly-anticipated final round of the 2009 Monster Energy Super X Championship, at the QSAC Stadium in Brisbane on Saturday, December 5.

The inclusion of these top riders for the series finale makes it the biggest rider line up ever assembled in Australian supercross history, which is a mouth watering prospect for all race fans. The event will also host the largest ever supercross crowd in Australia with organisers expecting 25,000 fans after already selling more than 22,000 tickets.

Riding for his American team, Muscle Milk Toyota JGR Yamaha with support from CDR Rockstar Yamaha whilst he is in Australia, Josh Grant is one of the fastest riders in the world and is in top form after winning the first round of the 2009 AMA World Supercross Championship as well as a number of podium finishes earlier in the year. Grant finished fourth overall in the series and became the first rider in history to win their first race in the AMA Open class.

“I can’t wait to get down to Australia and race. I have never been there before and I have been hearing all about what a great series Super X is. I heard that Australian fans love their sport as well so I am looking forward to giving it my all and putting on a good show for them,” said Grant.

Also joining Grant is Honda Red Bull Racing’s Davi Millsaps, who finished an impressive eighth overall in the 2009 AMA World Supercross Championship and also gained a number of podium finishes. Millsaps has been a dominant rider ever since he turned Pro in 2004 and came fourth overall in the 2008 AMA Supercross series. Woodstock Honda Thor Racing will be assisting Millsaps whilst in Australia.

This announcement comes after the late withdrawal of current world supercross champion, James Stewart, from the Brisbane round due to serious illness. Super X promoters have been working tirelessly to secure top international replacements, which has not been an easy task given the incredibly short timeframe.

Managing Director of Global Action Sports, Mitch Porra, who is the promoter of the Monster Energy Super X Championship, said that he is really excited about bringing these great competitors out for the Brisbane round and knows it will make the racing at the series finale truly spectacular.

“We were all so disappointed when James pulled out, which is why we have been working so hard to find replacements to ensure dedicated fans still get to experience the biggest supercross event ever held in Australia. This year’s series has been a huge success and it has all been building to the finale in Brisbane. It could be anyone’s race, especially with the cut-throat Triple Challenge race format in the final.

“The two USA riders will be up against series leader, Chad Reed, who will be looking to race well to defend his title; second placed Daniel Reardon, third placed Jay Marmont and fourth placed Tye Simmonds will be battling for the top championship positions and top Australian riders that both race in the USA, Michael Byrne and Daniel McCoy will be looking to finish the series on a high. The inclusion of Matt Moss in the Open class will only add to this. He recorded the fastest lap time last weekend in NZ over Reed and is such an explosive rider to watch,” concluded Porra.

The track in Brisbane will be a sight to behold and is 30% bigger than any supercross track previously built in Australia. 7,500 tonnes of dirt will be shaped and moulded into a highly technical track that spans over a kilometre in length to produce an average lap time of over 60 seconds.

The hugely successful Triple Challenge race format will feature in the finals of the Open and 250cc classes, which pits riders against each other in three, seven lap races (Open) and three, five lap races (250cc). Three nail biting holeshots followed by such short and fast sprints will create action packed racing that leaves no room for error.

Great tickets to the final round of the Monster Energy Super X Championship in Brisbane are still available through www.superx.com.au.