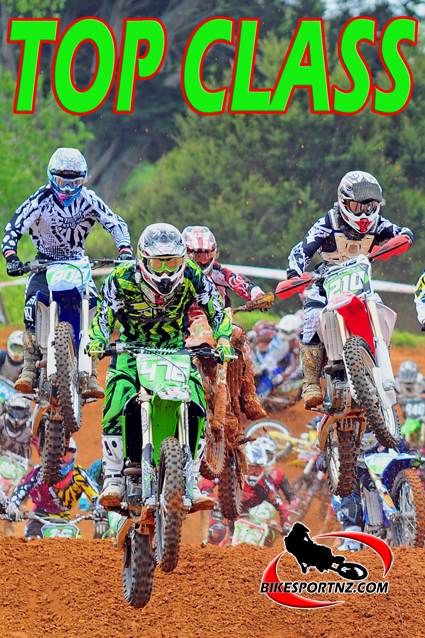 The national motocross championships are so much more than that these days, it is a true international-calibre competition.

So says David Furze, president of the Taranaki Motorcycle Club, host of the fourth and final round of this year’s series at the Barrett Road Motorcycle Park on Sunday.

“It’s a world class event, with so many Kiwis now racing overseas and then bringing their talent back home to contest this domestic series,” he said.

“It’s unfortunate that Hawera’s Daryl Hurley is now sidelined with injury, but there are still so many other international riders lining up this weekend, Kiwis who been racing this year in Europe, Australia, Canada and the United States.”

The New Plymouth venue has proven to be a championship graveyard for many contenders in the past few years and the racing on Sunday again promises to be a thriller with all classes in this Demon Energy-sponsored series yet to be decided.

Cooper comfortably won all three MX1 races at round three at Patetonga, near Morrinsville, last weekend but the consistent McDonald has not finished below third place all season and — with just 11 points to separate these two men — the racing will be close on Sunday.

However, we can’t count out Mount Maunganui’s Mason Phillips (Kawasaki), Taupo’s Brad Groombridge (Suzuki) or Gisborne’s Shaun Fogarty (KTM) from throwing a spanner in the works. These three men are third, fourth and fifth overall respectively and in a very close battle for the third podium spot.

In the MX2 (250cc) class, the battle is tense between Kiwi internationals Michael Phillips (Honda), of Rotorua, and Queenstown’s Scott Columb (Suzuki), both men having returned from a successful season of racing in the UK.

The pair were level-pegging at the start of the day at Patetonga, but Phillips emerged at the end of it with a slender four-point lead.

Phillips will come under fire in Taranaki with Columb determined to overturn the deficit at a track he describes as “one of my favourites”.

The 33-year-old King is formerly from Taranaki and he learned his craft racing with his brothers Shayne and Darryll on the Barrett Rd circuit before they each headed to Europe to race the GPs.

“I can afford to cruise on Sunday … but I won’t,” said Damien. “I really want to put on a good show for my family and friends from Taranaki,” he said.

However, Martens leads the race-within-a-race for under-21 age-group honours, ahead of Mangakino’s Kayne Lamont (Yamaha) and Wanganui’s Tom Managh (Suzuki) and he is expected to wrap up that title on Sunday.