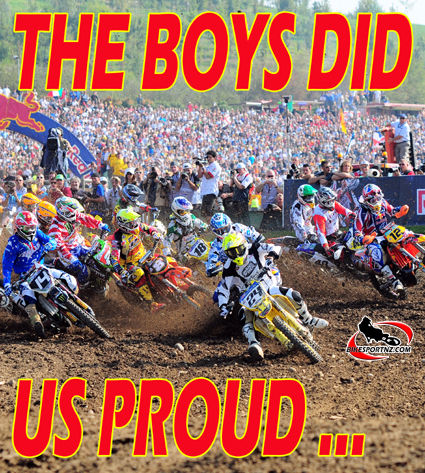 The Star Spangled Banner rang out over the man-made slopes of Franciacorta in Italy as Team USA again won the prestigious Motocross of Nations on Sunday.

But it was not without drama as the fortunes of several nations changed drastically early in the closing race of the 2009 edition of this “Olympic games of Motocross”.

Two high-speed crashes in the first few corners saw the hopes of top-qualifying teams Italy and France dashed, while the most consistent team, the United States of America, swooped in to snatch the coveted Chamberlain Trophy for a record 20th time, their fifth in succession.

Italian motocross superstar, the current MX1 world champion and the overwhelming crowd favourite, Antonio Cairoli was involved in a multi-bike pile-up in the first corner, effectively ending the host country’s dreams of a third MXoN win  — the Italians had previously won in 1999 and 2002.

The French Open class rider, Gautier Paulin, was involved in a separate crash just a few corners later, suffering injuries serious enough that he was unable to join team-mates, Marvin Musquin and Steven Frossard, on the second step of the podium.

Team USA won the day with an unlikely score of 22, a very high tally in comparison with the winning scores of previous years.

MX1 rider Ryan Dungey finished first and third in his two outings, the best result of any rider at the event, while Open class rider Ivan Tedesco finished third and seventh, with MX2 rider Jake Weimer contributing with an eighth and 25th (the 25th being the Americans’ score to discard with only five of the six results to count).

Team New Zealand was in 10th position as it headed into the third and final race but Queenstown’s Scott Columb (Open class) was unable to pull off another brilliant holeshot, as he had in the previous race (pictured above), and instead he tumbled even before reaching turn one.

“It threw him off but he got back on and restarted. However, the radiator had a hole in it, so the decision was made to withdraw from the race.”

New Zealand had to settle for an unaccustomed 11th overall.

It could have been so much better for Team New Zealand.

Columb’s performance had showed plenty of promise earlier in the day, as he kept pace with the sport’s superstars following his holeshot, eventually coming home an impressive 12th in his first outing.

“He really showed his class and experience,” said McLeod.

Columb and Phillips now face a quick trip back to race at the opening round of the Demon Energy 2009 New Zealand Motocross Championships near Timaru next weekend.