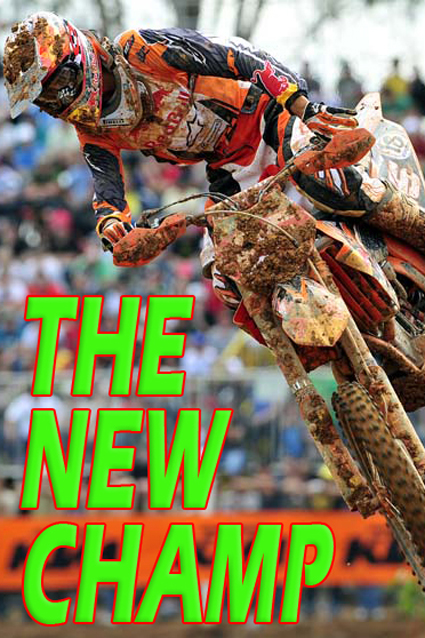 It has been a rapid rise to the top for French teenager Marvin Musquin.

Barely two years after leaving the UEM EMX2 series with a bitter fourth, the 19-year-old Musquin made up for it by grasping this year’s MX2 world title.

He wrapped up the title with back-to-back wins in his class at the muddy season-ending Brazilian GP at the weekend.

The young Frenchman’s season was distinguished by several important achievements, such as his maiden podium appearance (Faenza), his maiden GP win and pole (both at Sevlievo). Though a troublesome switch of manufacturer from Honda to KTM forced Musquin to skip the Swedish GP, it is something he made up for with a strong end of the season and the eventual title win.

After South African Tyla Rattray won the 2008 MX2 title, the Red Bull KTM Factory Racing retains the No.1 plate courtesy of Musquin who now follows 2006 MX2 World champion Christophe Pourcel in the records of the MX2 world champions from France.

Musquin’s professional career started off in the European Championships, the best preparation for all riders aiming at the Grand Prix series.

Winning the 85cc series, Kawasaki-mounted Musquin moved on to the EMX2 class and progressed dramatically together with the Bud Racing squad.

The Frenchman went from taking 24th in the 2006 series to a solid fourth in the 2007 EMX2 campaign which was won by countryman Gautier Paulin.

Courtesy of his brilliant 2007 season Musquin was offered the chance to race the Grand Prix in Faenza where he showed an impressive potential before fading to sixth in heat one.

The performance meant he was ready to join his colleagues in the world championship which is what he did in 2008, after working hard in the winter to gain the endurance he missed at his first outing in Italy.

Musquin moved to the NGS squad and to Honda for his first ever season in the FIM Motocross World Championship. The all French association of Musquin and team manager Losito showed a good potential but an injury at the Czech GP was a big blow for the duo aiming at a top 10 finish in the MX2 standings.

Musquin broke his collarbone and a bone in his foot, missing two Grand Prix’s but coming back at Faenza to seal a 14th place in the championship.

In 2009 it was a renewed Musquin at the gate of Faenza, where the season started in the mud. The French rider went straight on his maiden podium by taking third overall behind Jeremy Van Horebeek and overall winner Paulin, who would have been his main rival together with team-mate Goncalves.

Despite taking his maiden win in Bulgaria at round two, Musquin had to wait until Bellpuig before snatching the red plate from Paulin. At the following Grand Prix Musquin lined up with a factory KTM, leaving Honda and Team NGS.

Despite being new to the bike, Musquin went on to win that and the French GP and remained on the podium until Sweden, where he sat out of the event due to issues related to his recent switch of manufacturer. His comeback to action at Lommel marked another win for the now established factory KTM rider who was joined by team-mate Rui Goncalves in the top two.

A mechanical failure forced Musquin off the Czech podium but the teenager was back to action winning the Dutch and Brazilian G P, ending his most successful GP campaign to date with the MX2 World Title.

Musquin’s 2010 plans will see the French youngster remain with the Red Bull KTM Factory Racing Team to defend the Title.

Before 2009 ends, Musquin will be back to action at the Red Bull FIM Motocross of Nations at Franciacorta, Italy, on the October 4 weekend together with other team France members Paulin and Nico Aubin.