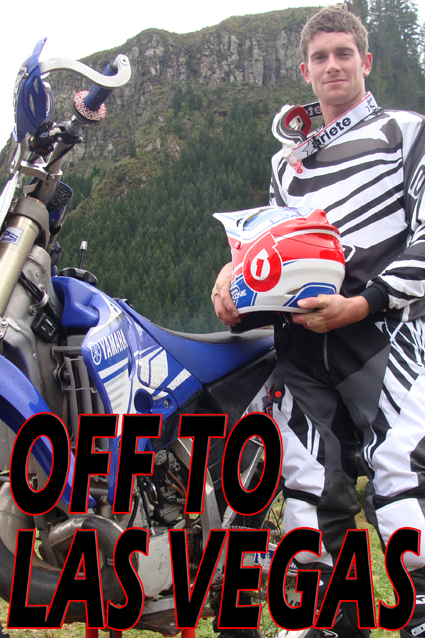 Whitby’s Rory Mead is hot property in the motorcycling world.

The 22-year-old Yamaha ace from just north of Wellington is now in such high demand that he may have to put on ice his career as a builder while organisers of some of the world’s biggest off-road bike events make increasingly loud overtures for him to travel to their big events.

Mead’s latest adventure will see him head to race an international “Endurocross” in Las Vegas in a few days’ time (on July 25) and it will also be his first outing after signing a deal last week to race with added support from Auckland-based importer Northern Accessories, wearing their popular AXO brand gear and boots.

“It’s very exciting to have someone on board who is of Rory’s calibre,” said Northern Accessories spokesman Steven Croad.

“We have been supporting Rory with Michelin Tyres for this season and he has had some great results, when this opportunity came up to take Rory to the Endurocross we put a full package together from head to with the help of AXO USA, and now we have a busy week ahead to get to Las Vegas.

“The AXO man from America was here to witness Rory win the Dirt Guide cross-country round on the Saturday and then win the inaugural Red Bull City Scramble endurocross in downtown Auckland on the Sunday and he was very impressed with what he saw.”

Croad said the event in Las Vegas would be very similar but more open and a little faster than the Auckland one – extreme obstacles in a confined space in front of large crowds in a downtown city setting – and Mead should feel “right at home”.

He also finished sixth on debut at the big international Erzberg Enduro in Austria just a few weeks ago, an event where only 23 of the 1500 riders who started actually reached the finish.

With the national enduro title, the Auckland City Scramble win and his Austrian success under his belt, in what has been a truly remarkable season for the Yamaha rider, Mead’s position among the world’s elite seems assured.

“The Auckland event was the first time I’d tried something like that,” declared Mead. “But it was a lot of fun. I’ll be up against some pretty big names in Las Vegas. I’m certainly not expecting to win but it will be a great learning experience.

The trip would not have been possible with out the help of the following sponsors, AXO USA, Yamaha New Zealand, Yamaha USA, Michelin. www.dirtguide.co.nz

For photos and race report afterwards, visit the news section at www.dirtguide.co.nz