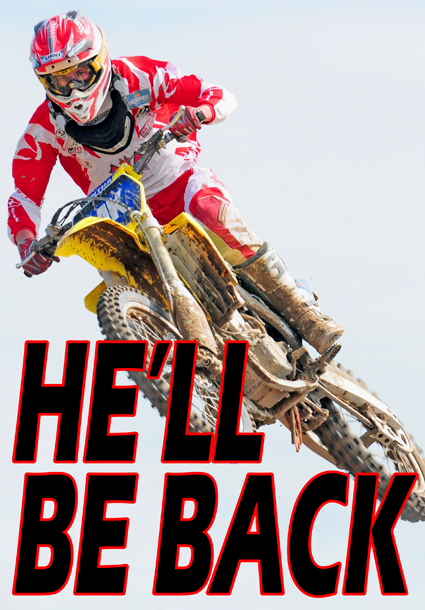 Latvian Mattis Karro is on the sideline but has vowed to be back to 100% in just over a week’s time.

Karro, who rode impressively and made many friends during his brief visit to New Zealand last summer, has been scoring points in the year’s MX2 world championship and also racing the British Motocross Championships.

Returning to ride his home GP in Latvia last weekend, after being forced out for a few weeks due to his hand injury, Karro has now confirmed his intentions to make a full comeback at round five of the British Motocross Championships at Lyng, in Norfolk, on July 12.

Riding in front of his home fans at Kegums, Karro showed the pace he attained ahead of his injury.

His return to GP action was made even harder with a crash during the qualifying race, which effectively ruined any chance of a podium place in the main races, having to start from the outside of the grid. However, he chose to make a slow gate and immediately cut across to the inside and made top 15 starts on both occasions and was able to run mid pack in both races, to show his fitness levels are high enough to match his obvious speed.

Meanwhile, Red Bull KTM rider and current British MX2 class Championship leader Stephen Sword decided not to travel to Latvia in an attempt to allow a small cracked bone in his right hand to heal. A further decision will be made this week as to whether he travel to Sweden this weekend as he is determined to be 100% fit for Lyng.

Sword has played down the injury, but has a light cast on his right arm to assist in the mending process. He did confirm that the MX2 British Championship title is his season priority.