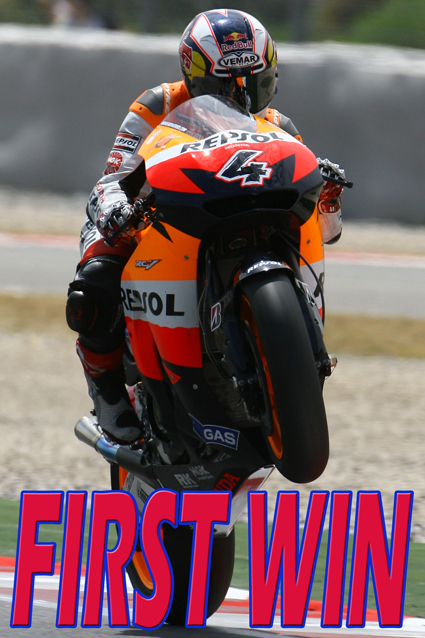 The 23-year-old took advantage after Yamaha duo Valentino Rossi, who started from pole position, and Jorge Lorenzo both crashed while leading in front of nearly 90,000 fans at this 10th round in the championships.

Rossi was able to remount his bike and finish fifth to increase his championship lead over the second-place Lorenzo to 25 points.

American Colin Edwards took second in the race for Yamaha, with Randy De Puniet of France coming third for Honda.

The inclement weather which had blighted the whole weekend again caused drama as Ducati pair Nicky Hayden and Stoner started with wet tyres on a dry track.

However, the rain held off until light showers near the end and Stoner soon found himself at the back of the field with Toni Elias, who qualified eighth, the surprise leader through the first two laps.

Lorenzo soon took the lead before Elias crashed after drifting on to the wet kerbs at Starkey’s Bridge.

Lorenzo crashed out on the eighth lap and was forced to retire.

Rossi appeared set for a routine win but then crashed with 11 laps left.

“It was a mistake for sure, the other laps I didn’t catch the line… it was impossible to keep on the track,” Lorenzo said.

“Today would be a real possibility to win some points but we lost the opportunity. Valentino’s crash helped us a little bit.”

“I keep thinking our goal is not to win the championship, if we are third or second it is a good result for us. If we can win it is unbelievable, but it is not our goal,” Lorenzo added.

The riders now enjoy a three-week break before the next race in Brno, Czech Republic on August 16.

Standings after the British MotoGP: