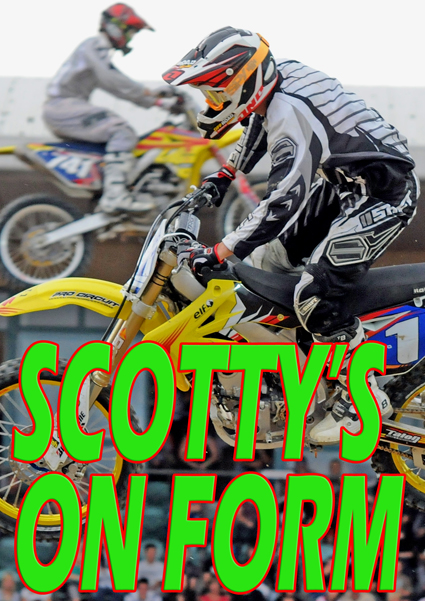 Queenstown’s Scotty Columb reports in from his latest adventure in the United Kingdom, contesting the fifth round of the British Motocross Champs in Lyng, Norwich over the weekend.

“The eastern England track was one I hadn’t been to in many years, my last outing there was five years ago on a Suzuki RM 125,” said Columb, now riding a Suzuki RM-Z450 for the Team Relentless Suzuki team.

“Some say Lyng is ‘a man’s track’ … it’s rough and fast. A manly man’s track — well I can think of worse. Overnight rain meant Sunday’s conditions were perfect. I qualified 4th fastest which was good, a personal best for me. I just about went down on a slow lap in a mud puddle which my team boss saw, he thought it was pretty funny ’cause I saw him laughing at me!

“Race one I started 5th and, three laps in, was going good. I was about to make a move on Bryan Mackenzie when the race was red-flagged due to a rider having a badly broken leg. We waited 15 minutes before the re-start, were I started 10th.

“Finding it tricky to get by some riders, I was behind Brian Mac again when we drew even off a jump, Brian on the inside of myself. It was a drag to the corner where we both meet at the same time, I was coming from the outside leaning in and Brian run out of room to stop for the corner knocking me over the berm.

“He went down and I lost a position to Jordan Rose. Now in a STR sandwich with James Noble behind me, I was trying to get by Jordon when he blew the berm out through the fast start chicane which being right behind him I didn’t see. I got in to a big tank slap and went down like a sack of potatoes, winding myself quite badly. I caught my breath and finished 11th. Disappointing considering I was in 6th place and Noble managed to get up to fourth.

“Race two I got an okay Jump, but the ‘Pirate’ (Brad Anderson) on my right pulled the holeshot and I was a little behind, with Brad clearing the way through I twisted the gas a little longer than the boys to my left and came out in third place, with Brian Mackenzie in front of me again. I followed him for 3 laps until he got a little off line, going over a berm and I snuck by for second.

“I kept the gas on and broke away from Tom Church behind me and the distance stayed the same between Brad and I for the next 20 minutes. When we hit lappers (which were a nightmare to get by as there were very few blue flags) at the 28 minute mark of the race Gareth Swanepoel was coming up fast.

“I made a mistake trying a new inside line and he went by me easily. I crossed the line in 3rd place, my best ever result in a British Championship.”

Team manager Rob Hooper said: “Despite a little bad luck in the first moto, we can be proud of what we’ve achieved. Scott had a small misfortune in race one, but dug deep and showed his true pedigree in race two. To conclude, I think we can be pleased with our performance and build on this for the remainder of the season.”

Overall for the day with a bad first race, Columb still managed to finish 6th, but slipped back to seventh in the championship a few points behind Tom Church.

“However, I finished 3rd in that second race, which I am well pleased with, but as always I want more!”

The next round of the Maxxis British Championship takes place on July 26 at the Foxhills track.