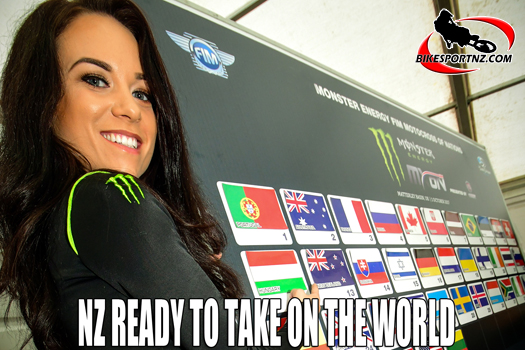 A talented three-man Kiwi motocross squad is revved up to race in the United States in just over two weeks’ time, determined to again challenge, and hopefully beat, the best riders in the world.

Every year, the Motocross of Nations (MXoN) lives up to its billing as the ultimate dirt bike spectacle and, on the weekend of September 24-25, the famous teams’ racing event will be held at the RedBud circuit in Michigan, not far from Chicago. There are 34 teams entered this year.

The MXoN, also commonly referred to as “The Olympic Games of Motocross”, is a one-weekend affair that brings together the word’s elite like no other motocross event.

The racers put aside the past season’s bitter rivalries from domestic or world championship competitions and unite instead along different battle lines, with three-rider teams formed up to fly the flags of their respective homelands.

And it will be a fresh trio of Kiwis racing at this year’s event in the US to those individuals who represented New Zealand when New Zealand last sent a team in 2019, when the event was staged in The Netherlands.

Tauranga’s Brodie Connolly will be New Zealand’s MX2 (250cc) class rider this year and it will be his MXoN debut, the teenager joined by two riders who do have previous MXoN racing experience, Waipukurau’s Rhys Carter (Open class) and Tauranga’s Josiah Natzke (MXGP class).

The MXoN did not proceed in 2020 due to the COVID-19 pandemic and New Zealand did not send a team to the MXoN in Italy last year because of safety concerns and continuing travel difficulties associated with the pandemic.

But the Kiwis will be back with a vengeance at this season’s 75th annual edition of the MXoN and they will again managed by former motocross world champion racer Shayne King, from New Plymouth.

King was the 1996 500cc motocross world champion and a winning rider for New Zealand at MXoN events in the past. He said the racing in Michigan would be harsh and the Kiwis will be under no illusions about that.

“Every year it’s the toughest motocross event in the world,” said King, a man who raced for New Zealand at the MXoN on 12 occasions and was twice instrumental in putting New Zealand on the podium (third overall in England in 1998 and then third again in Belgium in 2001).

“We have had a challenging couple of years in this sport due to the pandemic, but we’ve been shown great support from the New Zealand motorcycling community to get up and running again,” said King.

“We lost first-choice rider Hamish Harwood due to an injury he sustained in Australia last month, but, fortunately, Rhys Carter was prepared to step up from his role as our reserve rider.

“From a little island at the bottom of the world, we know it’s a huge deal to be able to step up to this level of competition, but we know too that, when we pull on the silver fern shirt, we become bullet-proof and 10-foot tall.

“Our first task will be to get through the qualification phase on day one of racing. If we can make the A final, then anything else is a bonus.”

The Kiwis know it won’t be easy facing the world’s elite on such a massive stage, but each of them is determined to put on another good showing.

With generous support for this year’s campaign coming from the sport’s governing body here, Motorcycling New Zealand, and from building companies Penny Homes and Best Build Construction, along with massive fundraising undertaken by the Taupo Motorcycle Club with their Battle of the Teams motocross event in June, the Kiwi contingent will arrive in the US in a confident mood.

Motorcycling New Zealand general manager Mike Kerrisk said: “We are delighted to be able to support these riders and the management through this campaign after such an absence through ‘global challenges’ over the past two seasons.”

“The team shows a great blend of youth, experience and obvious ability. We wish them all the very best and know they will represent us well.”

The New Zealand team will fly to the US on September 19.