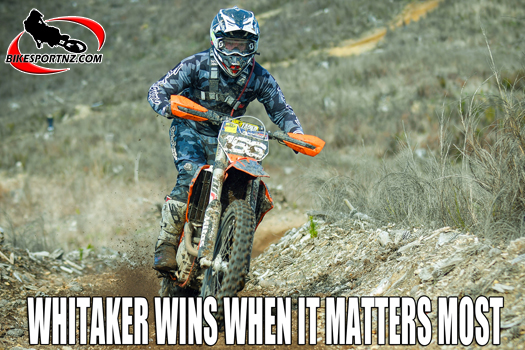 The series win was his for the taking and that’s just what Wainuiomata’s Jake Whitaker did when he dominated the third and final round of the 2022 Forestland Cross-country Series near Atiamuri on Saturday.

Consistency was certainly also a factor after Whitaker (KTM 250 EXC-F) had finished third overall and then fourth overall at the previous two rounds of the popular series, but he truly dominated proceedings when it mattered most, at Saturday’s grand finale, finishing the two-hour senior race more than a minute clear of runner-up rider Damon Nield (KTM 250SX), from Tauranga.

That made it a 1-2 result for the KTM bike brand, but, when Auckland’s Ryan Hayward (KTM 250) crossed the finish line in third position on Saturday, just a further minute behind, that made it a clean sweep for riders of the distinctive orange machines.

But the spotlight shone most brightly on Whitaker, the now 31-year-old father-of-two who was a record eight-time New Zealand motorcycle trial champion, before switching codes to focus on enduro and cross-country racing instead.

“I didn’t get a great start on Saturday and was only about third or fourth out of the first corner. I sat in that position for the first half of lap one (of what would eventually be a five-lap race). Then I took the lead.

“Whitianga’s Blake Wilkins put a bit of pressure on me and it was tough because I knew he was my main threat for the series honours. We were equal on points at the start of the day and I really needed to beat him.” 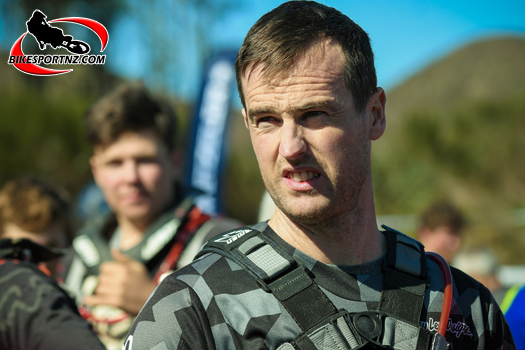 Wainuiomata’s Jake Whitaker (KTM 250 EXC-F), top dog in the 2022 Forestland Cross-country Series after his win at the final round on Saturday. Photo by Andy McGechan, BikesportNZ.com

But then luck played a part and it good luck for Whitaker and bad luck for Wilkins.

“Blake got stuck in a bog behind me and I think that was pretty much the end of his day. It’s a shame for him. He was riding so well.

“My riding speed has improved though lately and I credit recent motocross racing for that. I’m better at reading the terrain at pace and have increased my cornering speed too.”

The two individuals who dominated rounds one and two of the series – Taupo’s Wil Yeoman and Oparau’s James Scott respectively – were no-shows on Saturday because they had last week flown out to France to compete with the rest of the New Zealand team at the annual International Six Days Enduro, starting Monday.

But the absence of those riders did not lessen or dilute what was achieved by Whitaker and company at the Ohakuri forest venue, about halfway between Taupo and Tokoroa, these stay-at-home riders always title contenders anyway at national competition level.

Besides which, Whitaker is also himself no stranger to elite-level international competition.

“In my earlier days, when I was competing in major trials events, I raced the world championships in Europe and I have also previously tackled extreme enduro events in Austria and Romania.

“But my focus more recently has been on cross-country and enduro racing at home,” said Whitaker, who runs a successful furniture polishing business and also operates a bike seat upholstery business on the side.

This competition caters for cross-country riders aged from as young as seven, through teenagers, adult men and women and to the upper age brackets too, with veteran riders in their 60s, or even older, all keen to join in.

The popularity of this domestic competition, which features a 90-minute junior race followed soon afterwards by a two-hour senior race, includes separate trails that will cater for all levels of confidence and ability.

Best of the juniors was Tauranga’s Jack Coleman (Husqvarna TXC250), who won the 90-minute junior race on Saturday, although Auckland’s Leo Copping (KTM 150XC) was runner-up on Saturday and that was enough for him to win the series overall in the junior grade.