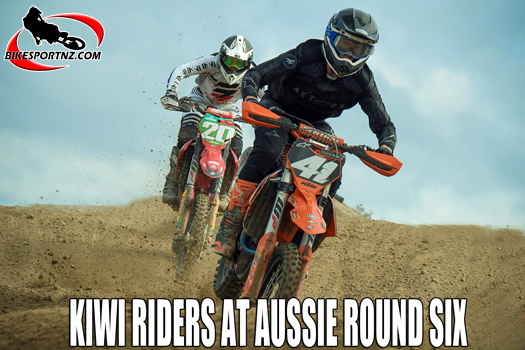 There will be at least two Kiwi riders on the start line when round six of the Australian ProMX Championships blast off at Coffs Harbour, New South Wales, this weekend.

Taranaki’s King brothers will once again take on the Australian elite.

And no, this time it’s not Darryll, Shayne and Damien King, but rather Shayne’s young sons Curtis (pictured here) and Rian who will be sweeping through all the corners and trying to tame the cream of Australian talent, just as their dad did a few years ago.

Although they did not race the earlier rounds in Australia, the Alpinestars-backed King boys intend to fly the silver fern flag at each of the final three rounds.

Sunday’s event will also be the official “Retro Round” of the 2022 Penrite ProMX Championships.

The fun and atmosphere of the “Retro Round” will combine incredible ProMX Championship classes on track action with the Pre-95 and Classic Evo Cup support classes, giving race fans and classic motocross enthusiasts alike a great opportunity for a once a year show of heritage and nostalgia on the race track.

Northern NSW race fans will be in for a real treat of incredible on track action and even have the chance to meet their former racing heroes with Saturday afternoons “Australian Motocross Legends” meet and greet from 4.30pm at the track, featuring former champions and legends such as Jay Marmont, Glen Bell, Craig Dack, Lee Hogan and more.

Away from the fun of “Retro Round”, it’s all business as Coffs Harbour hosts the gate keeping round that leads to the Road To The Championship, with the final two Queensland rounds of the series in August.

It is safe to say that any riders looking to stake their claim on being in championship contention down the stretch will need to make their mark and a big statement this weekend at Coffs Harbour.

In the MX1 class, the entire field of riders has witnessed the coming of age of CDR Yamaha Monster Energy’s Aaron Tanti over the last few gate drops of the championship.

Tanti has gone from strength to strength, taking the final moto win at Gillman Round 4 and 1-1 maximum points at round five at Maitland.

The momentum, intensity and flawless bike set up of Tanti is clearly swinging in his favour and Tanti will look to capitalise on this with more moto wins and points from Coffs Harbour.

As unlikely as Tanti’s championship run may have seemed at the start of the series, he now sits with a healthy 26-point lead, ahead of Husqvarna Australia’s Todd Waters in second, with GO24 KTM’s  just two points further back in third in the standings.

For these two veterans, it will be crucial to bridge the gap to Tanti now and establish a challenge to his emerging Championship run.

The anomaly within the top five in the points is HRC Honda Racing Australia’s Dean Ferris, sitting in fourth with 175 points heading into the weekend’s racing.

Ferris has shown flashes of his blistering speed and dominating strings of moto wins that he was so famous for, but small injuries and consistency have hampered his championship potential.

Ferris is a rider who can rebound and mount a run at any time and Coffs Harbour will be the time for him to mount his charge on Tanti and make up points to get himself back in contention for the MX1 crown.

Kirk Gibbs, on the KTM Australia machine, sits in 5th position, however surgery on an injured thumb from Maitland may hamper his on track intensity for this weekend.

Outside of the Championship top five, BBR Motorsports Matt Moss has also seen a return to form at Maitland where he finished 2nd overall and will look to carry his momentum into the rest of the season.

In the MX2 class, it has continued to be the Wilson Todd show all season long. Todd has been on another level and Maitland was no exception.

The HRC Honda Racing Australia rider has shown a combination of unmatchable speed and at times, patience and maturity to weather the storm of challengers. Todd sits with a healthy points lead with the championship leader’s red number plate and, down the stretch, it really is the challengers who will provide the potential for an upset with moto and round wins.

The challengers come in the form of Serco Yamaha’s Jesse Dobson, fresh off his second overall at Maitland, Yamalube Yamaha’s Rhys Budd who will look to rebound after a challenging time at Maitland, Serco Yamaha’s Bailey Malkiewicz, who continues to recover from his knee injury from Gillman and return to the race winning form we saw at Mackay earlier in the season.

Gas Gas Australia rider Noah Ferguson will look to continue the momentum of his first career overall podium finish with third at Maitland, as will Husqvarna Australia’s Dylan Wills and the Empire Kawasaki team-mates Haruki Yokoyama and Jai Constantiniou, all having breakout rides at Maitland.

Can any of these riders mount a challenge to Wilson Todd at Coffs Harbour?  We will see on Sunday when the gate drops.