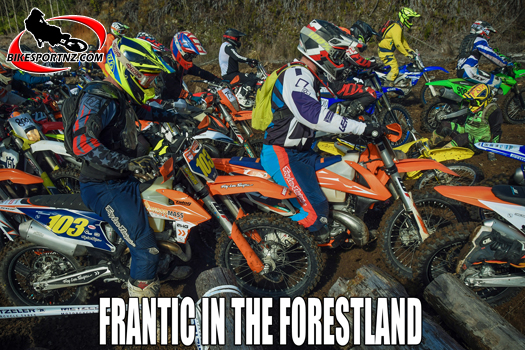 Riders due to head away to the International Six Days Enduro in Europe next month decided the weekend’s Forestland Cross-country Series opening round would be a good way to prepare.

And they weren’t wrong, with nearly 200 riders showing up at the venue just south of Tokoroa on Saturday to test themselves against one another on some of the toughest terrain and difficult conditions possible.

And, as expected, leading finishers in the senior grade included a few of the intrepid individuals who will also be travelling to France to race the ISDE between August 29 and September 3.

Saturday’s first round of three in the 2022 Forestland Cross-country Series – sponsored by Forbes and Davies, New Zealand’s leading importer and wholesaler of motorcycle tyres, ATV tyres, ride apparel, helmets and accessories – certainly provided a good opportunity for riders to sharpen their skills, with treacherous log-strewn up-hills, slippery mud down-hills, bogs and a few high-speed sections too all designed to keep riders on their toes (or, hopefully, up on their foot-pegs).

The popular series caters for cross-country riders aged from as young as seven, through teenagers, adult men and women and to the upper age brackets too, with veteran riders in their 60s, or even older, all keen to join in.

The series – rebranded from Dirt Guide XC Series to Forestland XC Series this year – is one of the biggest motorcycle cross-country events in New Zealand and riders travelled from over all over the North Island to accept the challenge.

After Saturday’s racing Tar Hill, the series will next take riders to a different forest course further south, at Ohakuri, about halfway between Tokoroa and Taupo, for rounds two and three, on August 13 and 27 respectively.

Series organiser Sean Clarke said the forest trails always provide something that appeals to all riders, from the elite national championship-winning stars of the sport, right down to the entry-level or novice riders.

Taupo’s Wil Yeoman won the two-hour senior race on Saturday, finishing ahead of Oratia’s Callan May and Wellington’s Jake Whitaker, with Whanganui’s Seth Reardon and Whitianga’s Blake Wilkins rounding out the top five.

Oparau’s James Scott and Waitoki’s Ben Cottrill, who will be joining Yeoman, May and Reardon at the ISDE in France next month, also rode impressively on Saturday, although they didn’t achieve the results they’d have hoped for.

National cross-country champion Scott was running in second position, losing his lead to Yeoman after coming into the pits for a quick “splash and dash” refuel, but it wasn’t enough of a “splash” and he ran out of fuel on the last lap. Scott therefore failed to finish, although he was still able to be credited with 26th overall.

Round 2, Ohakuri, August 13-14 (race Saturday and then trail ride the following day); 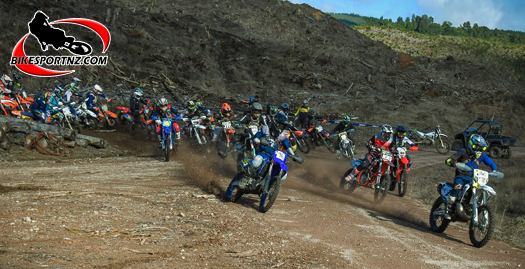 New Plymouth’s Tony Parker (No.140) snatches the lead at the start of the senior expert race on Saturday, with Wellington’s Jake Whitaker (No.166), Oparau’s James Scott (No.20) and eventual race winner Wil Yeoman (No.96) for close company. Photo by Andy McGechan, BikesportNZ.com