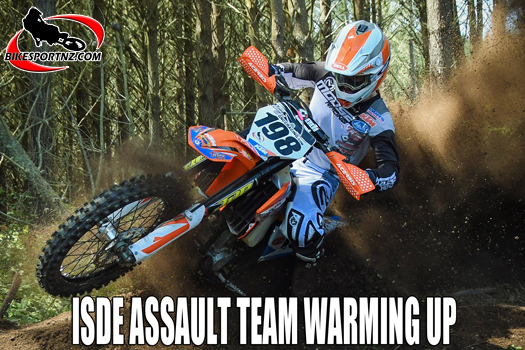 D-Day is fast approaching for New Zealand’s expeditionary forces and their much-anticipated landing on the shores of France.

Preparations for New Zealand’s first assault on the International Six Days Enduro (ISDE) in 16 years in progressing at great pace and confidence is high that the Kiwi riders will acquit themselves with distinction at the 2022 edition in southern France in just over two and a half months’ time.

Not since 2006 has New Zealand entered a team at the ISDE, but this year it has an extremely strong contingent and must fancy its chances of strong results at this high-profile off-road motorcycling event – to be staged near the town of Le Puy en Velay, in southern France, from August 29 and September 3.

The ISDE will again attract the dirt bike racing elite from all corners of the planet, with the Kiwi contingent thrilled to be a part of that and Team New Zealand manager Justin Stevenson, from Porirua, said he was having weekly meetings with the team members to sort out logistics, travel and accommodation to make this happen.

Stevenson is being assisted in his task by MNZ board member and experienced former motocross team manager Mike McLeod, also from the Wellington region.

“Queen’s Birthday Monday’s event near Porirua (round two of the New Zealand Enduro Championships) represented terrain very similar to what we might expect in France,” said Stevenson.

A strong contingent of supporters will also be travelling to assist the team during the event in France.

Reardon was elevated from the reserves after Christchurch’s Hamish Macdonald, currently based in Europe and racing the enduro world championships, was recently sidelined with injury.

Rangiora’s Ben Dando, Oratia’s Callan May, Waitoki’s Ben Cottrill and Helensville’s Josh Jack will also tackle the ISDE in France and will be on standby as reserve riders if a current Trophy or Junior team member becomes injured.

Yearbury, Reardon, Watts and Scott have been champions on the New Zealand scene in recent years, Yearbury winning the national enduro crown last year and Reardon in 2019. Watts was the 2021 national cross-country champion and Scott wrapped up the 2022 cross-country title just last month.

“What our riders are facing here at home is all very good training for the ISDE. We are doing a lot of extra training too,” said Stevenson.

“We recently completed a day of training with (Kiwi enduro legend) Sean Clarke in Taupo and this week we have two days of training with (New Zealand’s multi-time United States cross-country champion) Paul Whibley at his Taikorea facility, just outside Palmerston North.

“Hopefully we will be able to build this long term too, to get back into the swing of New Zealand sending a contingent to the ISDE every year from here forward.”