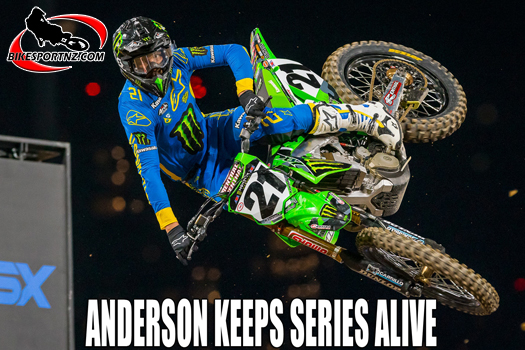 Kawasaki rider Jason Anderson and young Honda star Jett Lawrence were the big winners at round 15 of the 2022 Monster Energy AMA Supercross Championships in Massachusetts at the weekend.

Anderson won the 450SX class, forcing series leader Eli Tomac to wait at least one more week before he can claim the 2022 title, while a runner-up result by Australian rider Lawrence saw him crowned the 2022 Eastern Regional 250SX Class champion.

At the penultimate round for the 250 class, Austin Forkner took the race win, but Lawrence did enough in finishing second to capture his first AMA supercross title.

In the 450 class, Anderson was spectacular grabbing the win and hold onto his title hopes with only two rounds remaining in the series.

Chase Sexton challenged for the lead late in the race but had to settle for second place when the chequered flag flew inside Gillette Stadium, Foxborough.

Frenchman Marvin Musquin was back on the podium with a third-place finish inside the venue where he won when the series last visited in 2018.

Tomac needed only to finish ahead of Anderson to wrap up his second championship. But less than two minutes into the 20-minute plus one lap race, Anderson took advantage of Tomac’s battle with Webb to slice under in a corner.

The block pass was not overly aggressive, but in trying to avoid contact, Tomac stalled his bike.

Tomac re-fired his bike and took pursuit from sixth place as Anderson set his sights on Webb. Four minutes into the race Anderson took hold of the lead. Sexton was past Webb shortly after while the lead group, including Tomac, remained close.

Musquin, the race winner in St. Louis, took over third place. Tomac was up to fourth and looking ready to charge back to the front with 14 minutes still on the race clock.

Tomac’s charge never came as he slowly lost touch with the lead pack and as Anderson and Sexton pulled away to a two-rider battle upfront.

Sexton got close just past the race’s midpoint while Tomac lost a few more positions late in the race.

Then Anderson pulled back out to a comfortable victory, his fifth of the season.

It takes the championship battle to Denver where Anderson will need another strong ride, and a little luck in Tomac’s home-state race, to push his title quest to the final round.

“The track was really dry and rocky during the early parts of the day and made for some gnarly conditions in my heat race,” Anderson said.

“Thankfully by the time the main event was underway, the track was starting to come around and I was able to string together a couple of solid laps to take control of the lead. With the supercross championship quickly coming to a close, I knew this win wasn’t going to be easy so I kept charging and defending the best I could.

“I’m really pumped to get another win this season, but I definitely couldn’t have done it without all the effort put in from my entire team.”

Chase Sexton made his way to Anderson’s rear fender at one point, ultimately finishing just over three seconds back in second.

“I was a little bit slow in the beginning, and then after Eli stalled it, I picked up the pace a little bit,” Sexton said. “I knew Jason [Anderson] was going to be good from watching him all day, so I knew if I wanted to win, I had to go with him. There was a part in the middle of the race where I felt like I was riding really well, and lapped riders were definitely a factor; it was just a yo-yo effect, and then obviously he broke away.

“I’ve been close, but Jason has been riding really well and so has Eli. It’s not easy, but I’m doing the best I possibly can. I feel like my riding and confidence are getting better every weekend, and that’s definitely going to help me heading to the outdoors.

“I just want to finish this season strong and go for these last two wins and have some fun. When you’re having fun, it’s easy to be comfortable and go fast. Overall, I’m happy with how I’ve been riding.”

Musquin successfully got himself back on-track for a strong finish with two rounds remaining in the 2022 championship with a fighting third place.

“I’m enjoying the riding with the new setup on the bike,” The Frenchman said. “The track was challenging but I enjoyed it. Towards the end of the season, I’ve been feeling pretty good and getting on the podium right now is huge.

“I had a bad start but somehow, in the first two corners, I gained some time. It was a long Main Event but I managed to be consistent and get third tonight.”

A seventh place finish saw Tomac having to go to the next round to try and claim the 2022 450 crown, he still holds a 43-point lead with two rounds remaining and a maximum of 50 points on offer.

“It was a tough main event,” Tomac said. “I was upfront early but stalled the bike and then I got shuffled back a little bit and ended up just kind of playing it safe. It was a tough track, one of the tougher ones that we’ve had to where the jumps and the bottom of the transitions were just really tough to ride, period.

“It was a track I didn’t want to take a whole lot of risk on. We’re still in a really good spot for points, and we’ll go clinch it next week in Denver.”

When the riders lined up for round eight of the Eastern Regional 250SX Class’ penultimate round,  Lawrence was in a position to wrap up the title by finishing ahead of RJ Hampshire.

When the gate dropped Cullin Park jumped out into the lead and held it for over a lap before Pierce Brown took over the top spot. Lawrence had rounded the first turn mid-pack and was several positions behind Hampshire.

Brown stretched out his early lead as Hampshire moved forward from fifth place; Lawrence battled with Forkner as they sliced forward through the pack further back.

With under four minutes left on the race clock, Hampshire clipped Brown’s rear wheel while closing in on the lead and Hampshire went down.

Forkner and Lawrence were quickly past; both riders then reached and passed Brown in the closing laps.

The win was an emotional one for Forkner, his first since 2020, and the title was more so an emotional accomplishment for 18-year-old Australian  Lawrence, who takes the championship in his third year racing Supercross in the United States.

Lawrence earned the number one plate through consistency as well as speed. The popular racer finished every 2022 race on the podium, including four wins.

Only two rounds remain in the 2022 17-round Monster Energy AMA Supercross series and two more championship titles are yet to be settled.

The penultimate round takes place on April 30 at the Empower Field at Mile High in Denver, Colorado.