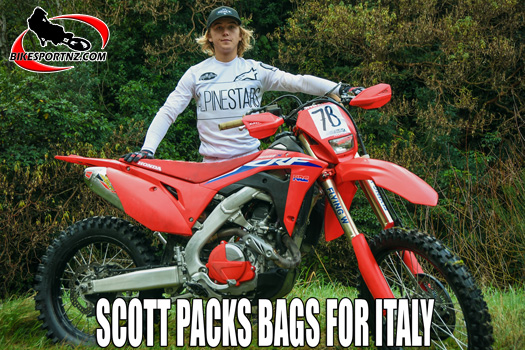 Europe, and probably the rest of the world too, is beckoning again to Oparau teenager James Scott.

The talented dirt bike rider from the Waikato region has already experienced racing motocross in Europe, tasting success as he tackled the Honda 150 Cup competition in 2016.

He also competed in the European 125cc Motocross Championships (EMX125) in 2018, his best result a fourth overall at the French Grand Prix, and he was the best-performed Kiwi at the annual Junior Motocross World Championships in Australia that same year, finishing the weekend with a world ranking of No.7.

A lot more recently, he finished overall runner-up in the MX2 (250cc) class in the 2021 senior New Zealand Motocross Championships.

But since then he baffled everyone, suddenly switching bike codes, and scoring unexpected and unheralded success in enduro and cross-country racing – “just for fun, during the motocross off-season”.

He took a Honda CRF450X to finish among the nation’s elite in the just-completed five-round 2021 New Zealand Enduro Championships and also rode the same versatile 450cc dirt bike to win the opening round of the popular Dirt Guide Cross-country Series near Tokoroa a week ago.

Remarkably, although motocross is his forte, it has been his recent successes on enduro and cross-country courses that have sparked interest in him again from overseas.

The Off-road Manager for Honda Motor Europe, Northern Ireland former motocross GP world championship racer Gordon Crockard, had been keeping an eye on young Scott’s career and, when one of Honda’s star Enduro World Championship riders went down with injury, he quickly picked up the phone and made a call to Waikato, New Zealand.

Unfortunately for the high-profile Italian-based Honda RedMoto World Enduro Team, their French rider Theo Espinasse crashed during a training session and fractured his collarbone, side-lining him from the Enduro GP World Championship for the short-term at least.

And it’s his position in the team that Kiwi hero Scott will now fill for at least two upcoming GPs.

The 19-year-old fencer has had no previous experience racing the powerful Honda CRF450X enduro model bike prior to the start of this year’s New Zealand Enduro Championships and he very nearly finished that five-round series among the top three overall, settling instead for fourth overall after disaster struck for him late in his campaign – a rock bent his disc brake rotor and he scored a non-finish.

Scott entered his first ever enduro event only last year, just dipping his toes into the sport, and this year he mounted a more serious campaign, even winning one of the two days outright at the Marlborough double-header round of the series in April.

Perhaps that was enough to set tongues wagging in Europe and, at extremely short notice this week, Scott is now set to board a plane for Bergamo, in Italy, on Saturday (yes, that’s tomorrow).

“It’s sort of a last-minute thing. They called up dad and asked if I was available. Gordon (Crockard) knew about me from my previous time in Europe.

“It’s crazy how things turn out. I’m very excited. My girlfriend, Anika, is coming with me. It’s a long way from Oparau to Italy. I’m a bit nervous,  but I’ve done it before.

“I’m not too worried about the COVID-19 pandemic. I’ll be very careful over there. I hope I can get a quarantine spot to get back into the country when it’s all over.”

Scott will ride in the Honda RedMoto World Enduro Team alongside experienced Finnish enduro rider Roni Kytonen, the pair of them competing on Honda CRF250RX bikes in the junior (EJ1) class in the world championships.

Kytonen finished fourth overall in his class at the most recent round in Italy last weekend.

There is a short break now after the Italian round, resuming with back-to-back rounds, beginning with the GP of Estonia on July 16-18, and followed by the GP of Sweden on July 22-24, both events hopefully a showcase for our Kiwi hero.