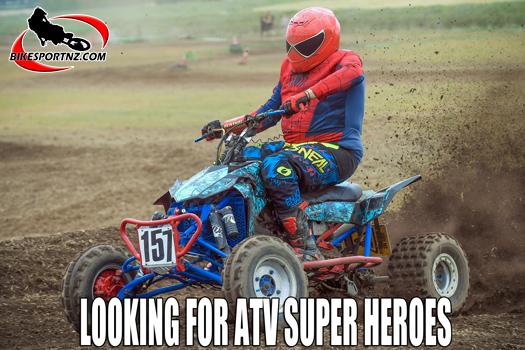 What kind of super hero antics can we expect this weekend at the 2020 New Zealand ATV Championships in the South Island?

The country’s best ATV racers will put it all on the line this Labour Weekend at the Duckmanton AG-sponsored 2020 ATV nationals, the two-day event hosted by the Canterbury ATV Association.

The popular Backflips Dirt Farm ATV facility at Pleasant Point, on the outskirts of Timaru, is always well-prepared and will provide an ideal battleground for the pilots of these sleek but powerful brutes.

Defending champion in the premier grade is Stratford’s Camo Keegan and it will be hard not to rate him as favourite to win again this Labour Weekend.

In addition to his younger brother Scott Keegan, the national ATV champion in 2015, others who could command centre stage in one class or another include Otorohanga’s Shane Robinson, Christchurch trio Craig Cox, Taylor Graham and George Doig, Amberley’s Angus Parish, Gisborne’s Ian Newman and Stratford’s Kim Reid, among others.

Multi-time former champion Ian Ffitch, from Amberley, returns to the race track this year, now fully recovered from the shoulder injury that prevented him from racing the nationals last season and he’s always worth counting on for a podium result.

Eltham’s Shane Hurliman will be eligible to race in the veterans’ class for the first time this season, the dairy farmer turning 40 just days before the event, and he reckons it may be his best chance of winning because he’ll be “a young one in the vets class … and every year that passes after this I’ll only be older and slower”.

“Most of the racers will be familiar with the track. The nationals were hosted at the same venue two years ago, so there should be no surprises.”

Among the female racers, expect to see Otorohanga’s Amy Corston and Stratford’s Nicola Reid (along with her with daughters Ashlee and Dannielle) to be among the leaders.