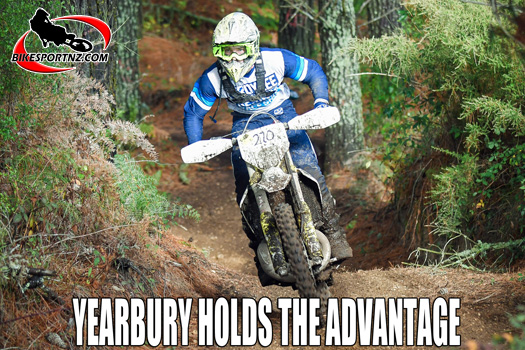 It has been quite a season for Waikato dirt bike racer Dylan Yearbury.

In a campaign disrupted by the Coronavirus COVID-19 pandemic, it would be understandable if his focus was slightly blurred and his motivation at a low ebb, but the 25-year-old builder from Cambridge has been exhibiting none of those shortcomings.

In fact, Yearbury took his new Husqvarna TE300i to finish runner-up in the opening round of the always-popular Dirt Guide cross-country series, just after virus lock-down restrictions were eased in June, and backed that up by also finishing overall runner-up in the just-completed New Zealand Enduro Championships, that series abbreviated to four days of racing over two weekends.

With the second of three rounds in the Dirt Guide series being run at Ohakuri, south of Tokoroa, on Saturday, Yearbury was determined to take it up a notch.

And that’s just what he did, the Husqvarna star winning the gruelling two-hour race by a solid 46 seconds over Helensville KTM rider Tom Buxton, with Yamaha-mounted Manawatu man Paul Whibley claiming third spot on the podium.

It wasn’t a straight-forward win, with Yearbury in strife early on, but he dug deep and battled through the traffic to record victory on Saturday, his win also earning him the series lead outright from round-one winner Whibley.

With a 4-2 score-card after the first two rounds, Buxton is third overall for the series.

“I got off to a great start and was in third position (out of 129 starters) as we headed into turn one,” Yearbury explained.

“But then I tried to make a pass on a rider at the end of a fast gravel road section and crashed at high speed. It was very slippery and I came into the corner way too hot.

“I was okay and uninjured, but this dropped me back to about 10th.

“I then just concentrated on working my way back towards the front. I passed Tommy (Buxton) for the lead on lap five of the six and then managed to pull a bit of a gap on him.

“My aim is to win the Dirt Guide series this year. It would be a first for me.

“It follows on nicely from my enduro nationals campaign, where I was leading the points but not quite able to seal the deal (by winning the title). I finished that series runner-up to 2019 125cc Youth Enduro GP World Champion Hamish Macdonald (of Christchurch), so I have to be happy with that.”

Meanwhile, Hamilton’s Rowan Watt (KTM) won the intermediate grade, finishing ahead of Taupo’s Scott Taylor (KTM) and Hamilton’s Luke Taylor (Gas Gas). It was a switch-around of the top two placings at round one of the series and so Rowan Watt and Scott Taylor now share the lead overall after two rounds.

With a 1-4 score-card after the first two rounds, Whangamata’s Ethan Jameson (Husqvarna) leads the junior grade for the series overall, just three points ahead of Bates.

The third and final round of the Dirt Guide series is set for the same venue at Ohakuri, in forestry near Atiamuri, about halfway between Tokoroa and Taupo, on August 15.