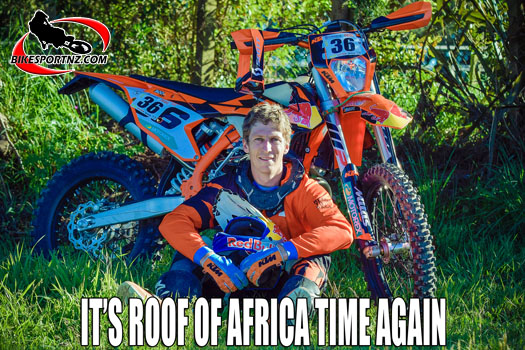 The Roof of Africa hard enduro event kicked off this week, so the wait is over and a dirt-bike onslaught on the Kingdom of Lesotho is underway … with Kiwi involvement too.

The annual Motul Roof of Africa runs from December 4-7 with a brand new start and finish venue at Thaba Bosiu.

To kick off the festivities the traditional ‘Round the Houses’ race returns in 2019 – an event that takes riders through the streets of Maseru. In an attempt to bring the sport to the people, Gold riders will battle it out for a starting position on an enduro cross track instead of a time trial before the two main race days.

“I’m super stoked to be coming back to race the Roof of Africa. This is one of the ultimate adventures you can do on a dirt bike. The Roof comes with a lot of challenges, but it’s also brought some of the most fun that I’ve ever had on a dirt bike!”

Also on the Brother Leader Tread KTM squad is Scott Bouverie, a household name in the South African world of hard enduro.

The rider has stepped onto the Roof of Africa podium twice in his career, finished third in the coveted Red Bull Sea to Sky, and placed fifth in Red Bull Romaniacs. He also managed to add his name to the handful of riders that conquered Erzbergrodeo in 2017 – only narrowly missing a top 10 finish.

After pulling out of the 2018 ‘Mother of Hard Enduro’ due to an illness, Bouverie is determined to make up for lost time and return to his former Roof of Africa glory on board his trusty KTM 300 XC-W.

“Difficult times have built me as a rider and taught me to ride within my limits. My confidence is back and stronger than ever,” said Bouverie.

A new name has been added to the list of elite riders lining up at the Roof of Africa this year – Bradley Cox is entered in the Gold Class for the first time in his career. While the multi-disciplined star is more widely known for his cross country and motocross skills, he is fast making a name for himself in South Africa’s world of hard enduro.

“I want to be one of the best enduro riders in the country, and I think I’m slowly on my way up there. I’ve always been known as the ‘motocross or cross country kid’, but I want to start building a reputation as the ‘enduro kid’ too,” said Cox.