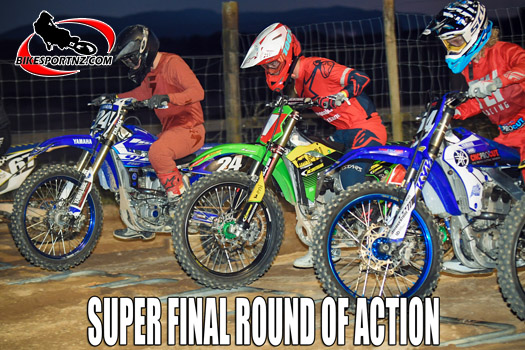 The 2019 New Zealand Supercross Championships wrapped up in Tokoroa on Saturday evening with  stylish and stunning displays of riding from all combatants.

Motorcycling New Zealand (MNZ) motocross commissioner Ray Broad and MNZ supercross co-ordinator Jim Cooper both said they were impressed with the calibre of the riding that was on show at round one of the series at Winton two weeks ago and at the final round at Tokoroa on Saturday.

Oropi’s former national Supercross champion Ben Townley dominated the 450cc SX1 class at both rounds of the Transdiesel eni Lubricants-sponsored series, although Rangiora’s Cody Murphy was equally outstanding and went close to pinching wins from him on several occasions at Tokoroa. 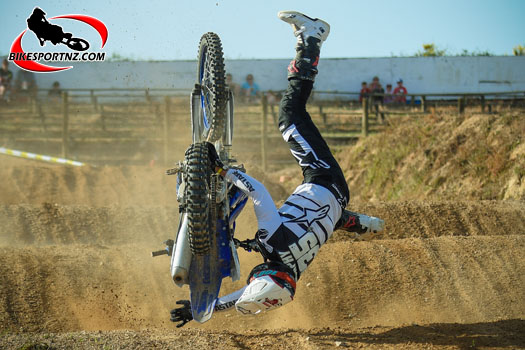 Rangiora’s Cody Murphy was in sensational form in Tokoroa on Saturday, constantly hounding Ben Townley for the SX1 class wins, although this spectacular crash dramatically ended one of his shots at a race win. Photo by Andy McGechan, BikesportNZ.com

Tauranga’s Roydon White raced the Tokoroa event only, but his performance on Saturday was enough to earn him the No.3 ranking.

In the senior SX2 (250cc) class there was also one man in charge of proceedings this year, Mount Maunganui’s defending national SX2 champion Josiah Natzke.

Balclutha’s Madison Latta was also impressive in finishing the championships in runner-up position, while Ohaupo’s Carlin Hedley and Richmond’s Liam Hutton produced fireworks in the fight for the last podium spot, Hedley eventually edging out Hutton by 12 points. 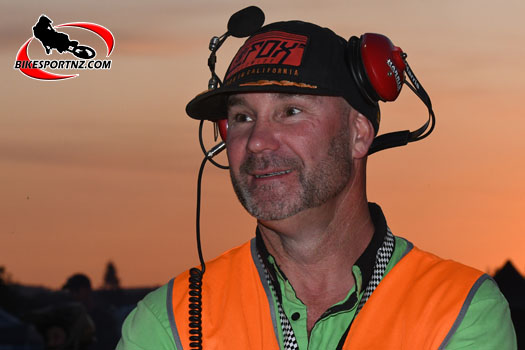 Tokoroa supercross race director Cory Duckworth, who had a fantastic team of helpers behind him, making it all run smoothly on Saturday night. Photo by Andy McGechan, BikesportNZ.com

Hedley was additionally awarded the Des Caulfield Cup for “most improved rider” of the series.

Des Caulfield was one of the men who provided land when supercross first began in New Zealand in the 1980s.

“The award was recognition for the best-performed newcomer, who demonstrated he had potential to go forward in the sport,” said Broad.

“Carlin (Hedley) is starting to develop as a promising supercross rider and he is an extremely enthusiastic individual.”

Cooper added comment that the “racing throughout this series was incredible”.

“The number of entries wasn’t huge, but the entertainment value was fantastic. We are looking ahead now to next season and building on this and keeping the fans coming along.”

Transdiesel eni Lubricants sponsored the series, while the Winton event was additionally sponsored by Brent Scammell Honda and the final round at Tokoroa is supported by Craig Stevens Yamaha. 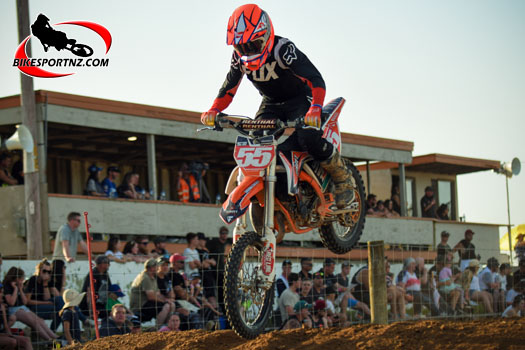 Invercargill’s Jack Symon (KTM No.55) leads the way in this Junior Lites championship race at Tokoroa on Saturday. Photo by Andy McGechan, BikesportNZ.com