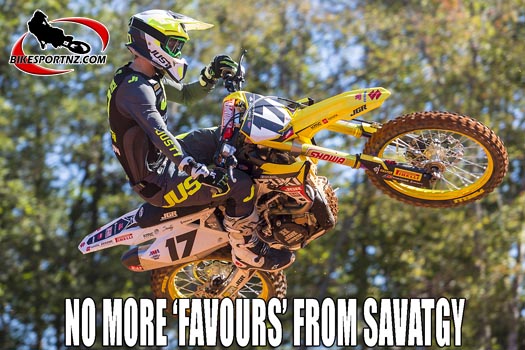 This season Joey Savatgy was the 450cc supercross rookie of the year in the USA, but the “gloves come off” for him next year.

There was a little controversy when he pulled over to assist then fellow Kawasaki rider Eli Tomac win the Monster Energy Cup last year – without so much as a “thank you” from Tomac – and that caused a little friction between the two men.

Savatgy was leading the 2018 Monster Cup and looked well on his way to winning the third moto and spoiling his Kawasaki team-mate Tomac’s chance of winning a million dollars, but instead Savatgy slowed down on the last lap and eventually waved Tomac past for the win and a massive $1 million dollar pay cheque.

There won’t be any more “favours”, however, as the 2020 season kicks off, with Savatgy now the Suzuki Factory Team’s bright new hope and also now without the “rookie” tag.

The Suzuki Factory Racing team in the United States announced its motocross riders for 2020 this week and Savatgy was confirmed as a member of the JGR Suzuki squad, poised to race his second season in the 450 class on the yellow machines.

Meanwhile, it was also announced that Alex Martin will return to represent the Yoshimura-backed team in the 250 class on his RM-Z250.

Savatgy, who is no stranger to winning on the Suzuki brand, having racked up multiple Championships coming up through the ranks in Suzuki’s Amateur Racing Program, will be a great asset to the team as he brings proven talent, speed, and versatility to the track.

During the 2019 Supercross season, Savatgy earned the 450SX Rookie of the Year award and ended the series with five top-five finishes. With 12 professional career wins to his name, he has proven he has what it takes to be up-front on the RM-Z450.

Millville, Minnesota native Martin returns to JGRMX/ Yoshimura/ Suzuki on his RM-Z250. With three podiums and 11 top-five overall finishes in his Supercross career, Martin was proud to add a career-best fifth place finish in the overall points standings on his RM-Z250 last season. A-Mart is eager to build upon those strong results and continue his successful career on Suzuki.

Said JGRMX Team Manager Jeremy Albrecht: “We are looking forward to the upcoming season with Joey and Alex. Joey has achieved very good results over the past few years and I expect him to have a break-out year in 2020. He impressed us in every test session on the RM-Z450 and he is extremely motivated. Alex returns for his second season with the squad and I couldn’t be happier. A-Mart made big gains in Supercross this past season and scored multiple outdoor podium finishes, so it will be fun to share in his progress.”

Added Suzuki’s SX/ MX Manager Chris Wheeler: “I’m looking forward to watching the JGR Suzuki team go to battle with Joey and Alex representing the RM Army. Joey was very impressive in his rookie 450 season. With a year under his belt and armed with the JGR-tuned RM-Z450, we look to see him regularly competing for podiums and race wins. Alex and the Team made a lot of progress with his bike settings last season, so I fully expect to see him consistently putting that RM-Z250 on the box both indoors and out.”