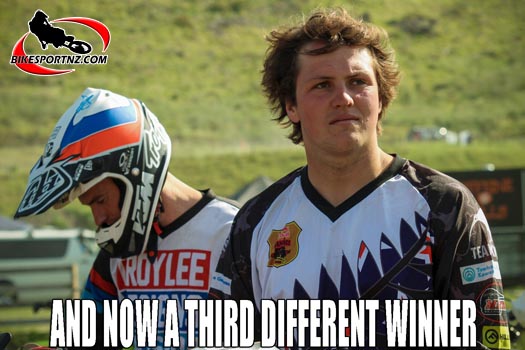 The New Zealand Extreme Off-Road Championship series produced its third different winner in as many events at the weekend.

Wainuiomata’s Jake Whitaker (KTM) won the elite Gold Class at the first round of four in the Yamaha-sponsored series near Whangamata in early September and Helensville’s Tommy Buxton (KTM) won round two near Porirua two weeks later.

But it was home-town hero Mackenzie Wiig (KTM) who took top honours at the weekend’s third round, a two-day affair with racing in Taradale on Saturday and Tutira on Sunday.

Napier’s Wiig won Saturday’s prologue event in Taradale, the course mostly man-made with tyres, rocks and steep ramps to keep riders on their toes, the local man edging out Buxton and then Whitaker for the day’s honours.

However, Whitaker won the four-hour extreme enduro event at Tutira the following day, crossing the line more than 30 minutes ahead of Wiig, with Buxton finishing third, 11 minutes further back.

This was enough for Wiig to be declared overall winner for the weekend, with Whitaker second and Buxton third. 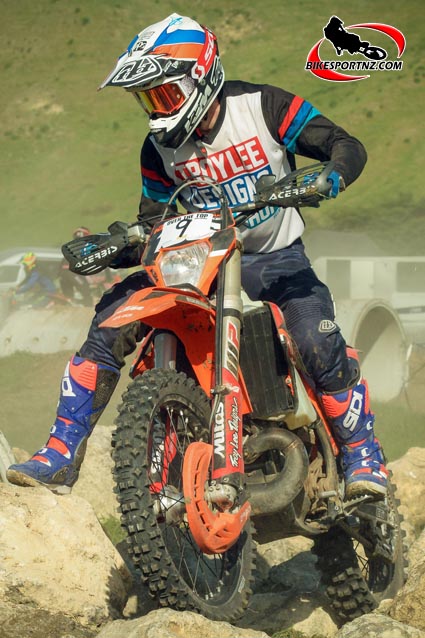 Wainuiomata’s Jake Whitaker (KTM 300EXC), who extended his advantage at the top of the standings in the New Zealand Extreme Off-Road Championship series in Hawke’s Bay over the weekend. Photo by Andy McGechan, BikesportNZ.com

The Hawke’s Bay event was billed as the “Over the Top Hard Enduro” and, despite the ominous “extreme” and “over the top” connotations, it attracted a large number of riders, from as far south as Christchurch, as far west as New Plymouth and as far north as Kaukapakapa.

Motorcycling New Zealand enduro commissioner Justin Stevenson said this indicated just how strong and healthy the sport was and how popular these more difficult events were, the extra challenge obviously having widespread appeal.

“It was a wonderful weekend of racing,” he said. “The heat took its toll and a few of the riders, but the courses were brilliant and the host Hawke’s Bay Motorcycle Club did a fantastic job.

“A lot of people drove a long way to be here, which just shows how popular the event is.”

Whitaker continues to lead the Gold Class overall after three rounds, improving from two points to now be four ahead of Buxton, with Parker five points further back in third. Wiig did not contest the series opener and will not be racing at the final, so he has no chance of taking the silverware this season.

In the Silver Class, Aucklander Mark Galbraith won the weekend overall, but this was his first appearance in the series and so he does not feature among the title contenders.

Instead, it is Hastings rider Brett Gunson (fourth overall at the weekend) who leads the Silver Class after three rounds, just ahead of New Plymouth duo Daniel Herbert (who was runner-up to Galbraith in this class at the weekend) and Mark Horwell.

Rerewhakaaitu’s Zach Sefuiva has moved up from third to first overall in the Bronze Class, thanks to his strong performances in Hawke’s Bay, with Kaukapakapa’s Lucia Oles in first-equal position and Whitecliffs’ rider Luke Corson holding on to third place overall despite not contesting round one.