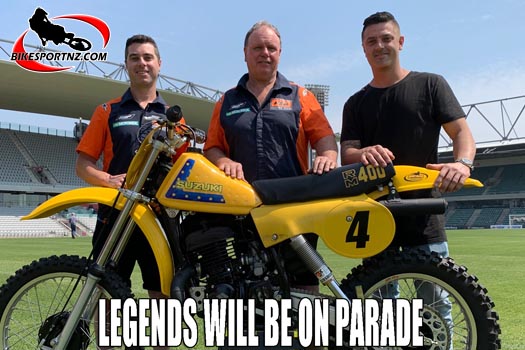 Fans at next weekend’s round three of the 2019 Australian Supercross Championship in WIN Stadium, Wollongong, are set to enjoy the ultimate dose of supercross nostalgia.

True fans of the sport will remember the fierce battles that guys like Gunter, Dack and Gall had.

Often referred to as the golden era, the Mr Motocross titles were the most coveted prize on offer and between the names above have collected 11 of the 16 titles. (Dack 4, Gall 4, Gunter 3).

“I will be riding my 1979 Mr Motocross bike, I look forward to being on the grid next to so many respected riders, Gally and I had incredible rivalries and to be next to him on November 9 in WIN Stadium will be something special. It’s great to see Supercross back in the Illawarra and I hope everyone comes to enjoy the atmosphere,” said Gunter.

The third round of the Australian Supercross Championship promises to me a spectacle both on and off the track and the addition of the Legends Parade is another great way for fans to enjoy  a trip down Supercross/Motocross memory lane.

“To see the names Gunter, Gall, Dack and the Marmont brothers on one grid will be a chance in a lifetime, they are among the Australian riders who shaped Australian Motocross & Supercross,” said Troy Bayliss (3 X World Superbike Champion and event promoter)

“The Gunter v Gall along with Dack rivalry was huge back in the 70s-80s and early 90s and to see these legends of the sport take to the track once again will be a very special occasion. True fans of the sport can show their appreciation for the part all these Legends and Champions played in the premier years of Australia Supercross racing.” Bayliss said.

CDR Owner and champion of our sport Dack is equally as pumped to line up next to his old foe and put on a show for the fans on November 9.

“To line up alongside some of the guys from my era not to mention some of my former CDR Yamaha team racers over the past 26 years will be such a special occasion. Geelong’s appreciation laps in 2018 was such a great thrill for us riders and the fans and I hope to see thousands of Wollongong’s fans enjoy it just as much,” said Dack

Gall looks forward to being on the grid next to Gunter, two of the real pioneers of Australian supercross and motocross.

“Anthony and I were at the very start of Supercross in Australia, I retired from racing in 1990 but have been actively involved since. To see the sport continue to evolve is great to see. To be at the gates and look left and right to see riders from my era and more recent will be something special,” Gall added.

The Australian Supercross Championship is supported and sanctioned by Motorcycling Australia (MA).

After Wollongong, the series crosses the Tasman Sea to stage round four at Auckland’s Mt Smart Stadium on November 16, with the championship wrapping up with round five in Melbourne (VIC) on November 30.

ABOUT THE S-X OPEN AUCKLAND

S-X Open Auckland will also form the fourth round of the Australian Supercross Championship, the first time an event in New Zealand will be a part of the Australian series, and will feature the Triple-Crown Final race format, with non-stop, high-intensity action that will have fans on the edge of their seats, for the entire duration of the event.

SX1 Championship Standings After Round 2 of 5

SX2 Championship Standings After Round 2 of 5