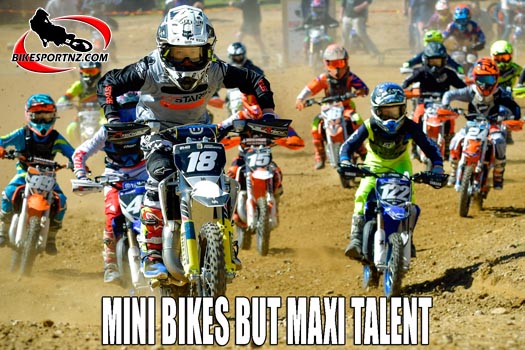 The future of Kiwi motocross goes on show in Hawke’s Bay this weekend at the mini motocross nationals.

Riders aged between four and 11 – and riding bikes with engine capacities anywhere between 50cc and 112cc – head into battle when the Hawke’s Bay Motorcycle Club hosts the two-day 2019 New Zealand Mini Motocross Nationals at the Ngaruroro Raceway, at Mere Road in Fernhill, on the outskirts of Hastings, this Saturday and Sunday (October 5 and 6).

The nationals are sponsored this season by Un4Seen Decals and the track that’s been provided is sure to test and/or delight these most talented young racers.

Many of the superstars from the premier 9-11 years’ 65cc MX class last season have now moved out of the mini ranks, graduating  to the junior competition, and this perhaps creates opportunities for fresh names to be etched on trophies in that class this weekend.

Egmont Village rider Travis Taylor finished third overall in the younger 7-8 years’ 65cc MX class last year and he now steps up to the 9-11 year’s division, perhaps making his the favourite to win this time around, although Cambridge rider William Pluck may have something to say about that.

Meanwhile, riders such as Pokeno’s Noah Otunuku, Palmerston North’s Murphy Barr, Auckland’s Colton Mcauley, Matamata’s Riley Westgate, Waipukurau’s Seth Iremonger and Pahiatua’s Rafe Paewai have each impressed in this premier 9-11 years’ 65cc MX class races at major mini motocross events in recent months and so they will also be worth respecting this weekend.

Several other class winners from last season have jumped up to higher divisions this year and they will be worth watching out for.

Last year’s No.4 in the 7-8 years’ 65cc class, Tauranga’s Arama Te Whetu, can expect to be challenged in this grade by Carterton’s Maddox Swanson, last year’s 6-8 years’ 50cc class champion.

International pathways can certainly begin at the mini nationals.

Motorcycling New Zealand motocross commissioner Ray Broad said that MNZ had now changed the requirement for riders having to obtain a championship licence and a club licence is all that is now needed, making it more affordable for more riders and families to compete.

“The mini nationals is a stepping stone for those starting out in motocross. It is great to see that big numbers will be turning up to this year’s event in Hawke’s Bay. Michelle Davies, our mini/junior motocross co-ordinator will be there as well,” said Broad.