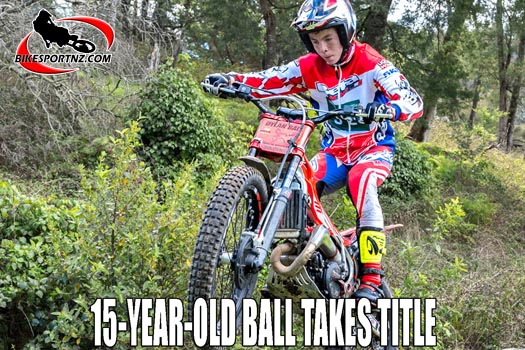 Porirua’s Dylan Ball created history at the weekend when he became the youngest rider to win the New Zealand Trial Championships in the premier division.

The just-turned 15-year-old Ball won the Expert Grade at the AdrenalinR Mufflers-sponsored three-day 2019 nationals in Hawke’s Bay over Labour Weekend, the annual event wrapping up on the Monday.

The now 28-year-old Jake Whitaker, from Wainuiomata, won the first of his record eight New Zealand trial championship titles in the expert class in 2007, when he was just 16. He last rode the trial nationals in 2015 as extreme enduro racing now takes his attention.

Tauranga’s Stefan Merriman won the same title as a 16-year-old in 1989, before he went on to win the junior world title later that same year (by then a 17-year-old).

Ball could also become a world champion if he keeps the momentum going and he has already experienced competition overseas, tackling the 125cc class at the world championships in Europe and Japan earlier this year, finishing eighth overall out of 20 riders.

Ball, a year 10 pupil at Whitby Collegiate, also won the Junior Grade at the weekend, edging out Hunterville’s Hannah Rushworth, while Rushworth herself did grab a national title, winning the Women’s Grade ahead of Wellington’s Isla Davis and Christchurch’s Evie Hubbard.

But most focus for Ball was on the premier grade and there he proved unstoppable, clearly winning all three days, out-scoring Christchurch’s Jules Huguenin and Taranaki’s Matt Foster.

Australian visitor Kevin Zarcynski won the New Zealand Experts Grade title last year but he was a no-show this time around.

“The course was right up my alley,” said Ball. “It was mostly steep rocks and that’s a challenge I enjoy. I didn’t drop too many points all weekend.

“I knew Jules (Huguenin) and Matt (Foster) were riding pretty well, but I just concentrated on doing my own thing.

“It has been a massive year for me and this result is a huge confidence-booster for me. I have been riding against top opposition overseas and training on pretty extreme terrain.

“I hope to go back to train more with (former world class trial rider) Joan Pons in Barcelona next year. I just have to get my school exams out of the way first.”

Motorcycling New Zealand trial commissioner Paul Jackson said everyone was really happy with the content of the sections.

“They were long sections and quite physical, but not dangerous. The riders needed to maintain their concentration.

“We had 22 mini riders entered and that was impressive,” he said.

“The minis was the highlight of the weekend. We introduced this class this year and it has been a great success. The minis had great support from parents, which was good to see too.”

Run by the Hawke’s Bay Motorcycle Club, day one of this event was set at  Tongoio, north of Eskdale, on Saturday, with day two at Waitara Road, off the Napier-Taupo Road, and it was wrapped up with day three at Dartmoor on Labour Day Monday.