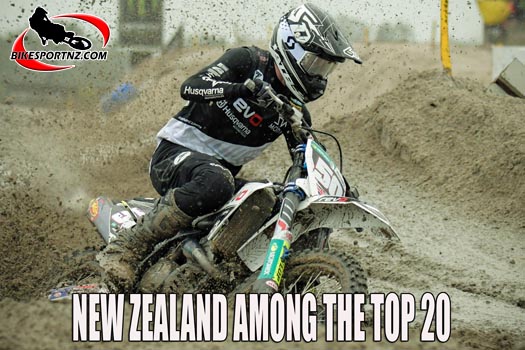 The conditions were tough, but New Zealand’s “development squad” battled through and rose above them in The Netherlands at the weekend.

The three-rider squad representing New Zealand at the 2019 Motocross of Nations at Assen fought bravely to earn another top 20 finish at this big annual “Olympic Games of Motocross”.

It was a completely fresh trio of Kiwis selected to race at Assen’s Cathedral of Speed TT circuit at the weekend after all three individuals who represented New Zealand last year, when the MXoN was staged in the United States, had been ruled out for 2019 either because of injury or for personal reasons.

But Taupo’s Wyatt Chase (Honda), Mangakino’s Maximus Purvis (Yamaha) and Christchurch’s Dylan Walsh (Husqvarna, pictured above) stepped into the breach to each make their respective MXoN debuts at this season’s 73rd annual edition of the event.

New Plymouth’s former motocross world champion Shayne King and Rotorua-based former top national-level racer Darryn Henderson shared the managerial duties and it was their experience and assistance, along with the sponsorship support from Penny Homes and Best Build Construction, plus the massive fundraiser undertaken by the Taupo Motorcycle club that supported Motorcycling New Zealand (MNZ) to allow the Kiwi campaign to succeed. 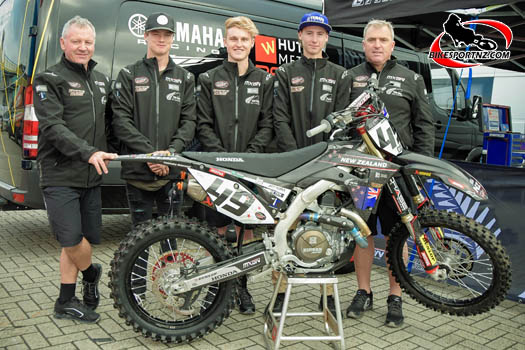 However, a mechanical issue struck Walsh in race one and then he suffered a crash while running 12th in race two – that resulted in him dislocating his shoulder – and these two incidents ruined what had otherwise been a promising campaign.

Chase was toughness personified as he and the rest of the team kept it quiet that he had seriously injured himself during a training crash on Wednesday, a spill that left him suffering ugly, deep bruising all down his right thigh. He amazed everyone that he was able to battle on despite this.

Enduring intense pain, his 34th and 38th (actually a DNF) results from his two races don’t reflect his ability or his attitude and he deserves to be congratulated.

Meanwhile, the youngest team member, just-turned 19-year-old Purvis took his 250cc bike into battle against riders on 450cc bikes in the Open class and he proved to be something of a revelation, his 27th and 33rd results extremely honourable under the circumstances.

As for the actual event winners, the favoured Dutch celebrated their first MXoN victory, Team Netherlands finishing the weekend well ahead of Team Belgium and then Great Britain, followed by Estonia and then last year’s champion Team France.

“The whole team was all about development. The guys did even more than was expected of them and I’m extremely proud of all of them,” said King afterwards.

The Motocross of Nations will be staged at Ernee, in France, next year.