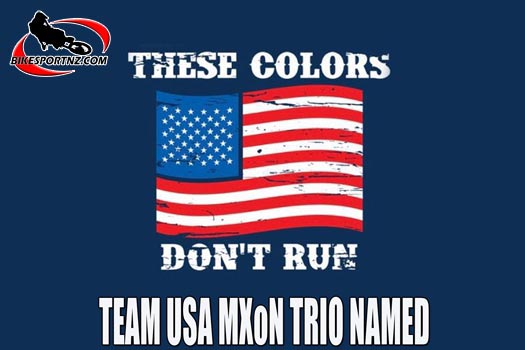 The United States team to race at the upcoming Motocross of Nations has been named and there are perhaps no surprises.

The 2019 Monster Energy FIM Motocross of Nations, which will be held at Assen, in the Netherlands on September 28 and 29, will feature Jason Anderson (MXGP), Zach Osborne (Open class) and Justin Cooper (MX2) wearing the stars and stripes colours.

For Rockstar Energy Husqvarna team-mates Osborne and Anderson, it will be their second appearances for the team.

Anderson raced the 2016 event at Maggiora, in Italy, and was remembered for winning the second moto, only to get landed on by a lapped rider while he rolled over the blind finish line jump, and he was unable to race the final moto.

Osborne raced the event at Matterley Basin, near Winchester, in England in 2018, and finished second overall to Australian Hunter Lawrence in the MX2 class.

For Monster Energy/Yamalube/Star Racing Yamaha’s Cooper it will be his MXoN debut.

The current 450cc and 250cc class points leaders in US nationals, Kawasaki pair Eli Tomac and Adam Cianciarulo, had been tipped as possible first-choice candidates for the team, but the Kawasaki team made the decision to make their men unavailable.

Interestingly and perhaps also significantly, when Team France was named last week, they did not feature Marvin Musquin or Dylan Ferrandis in their line-up, despite the fact that these two Frenchmen are currently running second in the US Nationals, in the 450cc and 250cc classes respectively.