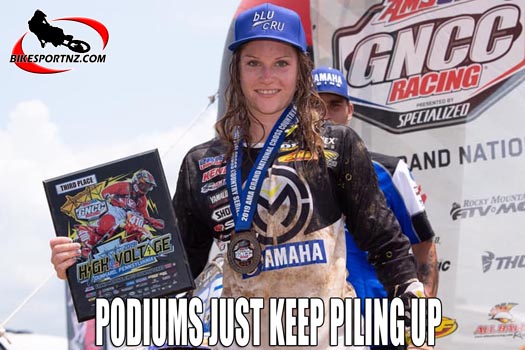 The 17-year-old from Ngaroma, near Te Awamutu, has long been a front-runner, even against the men, on the cross-country scene in New Zealand and now she’s turning heads in the United States as well.

Based in South Carolina, Archer is making her debut this year in the Grand National Cross-country Championships (GNCC) in the US, riding for the AmPro Yamaha Team, a factory team run by American cross-country legend Randy Hawkins.

The GNCC competition is an internationally-renowned series, with races scheduled all along the east coast of the US, from New York to Florida, and Archer took her Yamaha YZ250F to finish the day third overall in the WXC (women’s cross-country) class at the weekend’s ninth round of the series near the village of Dunkard, in Greene County, Pennsylvania.

“I started the race well (in Pennsylvania), going into the woods in third position and I knew I could stay with the leaders. I made a pass on the grass track section and got into second for about half and lap, but this was short-lived after I made a mistake and dropped back to third again.

“I then lost sight of the front-runners and was struggling to hunt them down. I just tried to ride my own race and get through the heat of the day.

“After that we were back in the woods where there was deep ruts and slippery tree roots everywhere. The bike was sitting well in the ruts, but my suspension was probably a little too harsh for the roots and I was getting deflected a lot. It was kicking me up into the front of the bike all the time. It was a physical race.

“It wasn’t my greatest performance and I had a few ups and downs throughout the race,” she acknowledged.

Nevertheless, Archer continues to impress in the US and has been on the podium for five consecutive events now.

Archer has complied a 8-5-4-4-3-3-3-2-3 score-card after nine of 13 rounds thus far and this has positioned her fourth overall for the championship, behind US riders Tayla Jones and Becca Sheets and Australian rider Mackenzie Tricker.

With temperatures rising in the US at this time of year, the sport now takes a summer break and Archer will return home to catch up with friends and family.

The GNCC resumes with round 10 of the series at Harpursville, New York, on September 15.

“I’ll be back to race the last four GNCCs and four enduro rounds too.

“When I return to the US, I will be riding the 2020 Yamaha YZ250FX, with a new-style chassis and motor, so I’m super excited for that too.

“The series will all be wrapped up by the beginning of November and I’ll be back home for my 18th birthday and Christmas. My plan is to come back again next year with bigger and better ambitions for the 2020 season.”

Meanwhile, fellow Kiwi Liam Draper is also excelling in the US this season.

Racing in the XC2 250cc Pro class, the KTM rider from Howick also finished on the podium in Pennsylvania at the weekend, his second consecutive podium of the year.

Draper is now fifth equal overall in the championship so far.

American KTM rider Benjamin Kelley, from Harwinton in Connecticut, has been unbeaten so far in the XC2 250cc Pro class this season and he comfortably leads the standings after nine rounds.