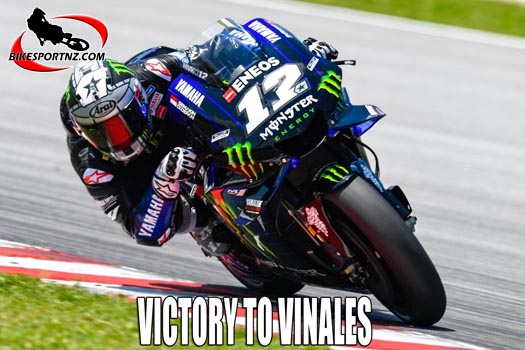 It was a day of mixed emotions for the Monster Energy Yamaha MotoGP Team at the TT Circuit Assen at the weekend, round eight of the MotoGP series.

Spain’s Maverick Viñales delivered a strong race performance at the Motul TT Assen round, riding his YZR-M1 to a brilliant victory after a hard fight at the front, but team-mate Valentino Rossi’s luckless streak continued in the Netherlands. Rossi suffered a crash on lap five, ending his challenge prematurely.

Viñales had a good start from P2, but a wobble in turn one left him a bit unsettled. He fell back to fourth, which he held crossing the finish line for the first time.

There was a small scrap between him and Marquez early on, until the number-12 rider noticed the three front men getting away, prompting him to make his move. As he chased the race leaders, frontrunner Álex Rins crashed. It didn‘t shake up the Yamaha rider though. He passed Joan Mir, and then the battle with Marquez and Quartararo really started.

The 24-year-old was in third place for a while and was having a good look behind Marquez with 14 laps to go, deciding carefully where he would make his move. He first led the race on lap 16, but Marquez proved difficult to shake. With 9 laps to go, the Yamaha rider ran wide going into Turn 1 and fell back to second place, but it was only briefly.

He retaliated, reclaiming the P1 spot. It was the right moment to put his head down, and this time he broke free from his rival. He showed his incredible race pace, setting a personal best lap of 1‘33.720s on lap 21.

The Spaniard kept his concentration until the very end and took the chequered flag with a 4.854s advantage.

However bad luck struck for the third time in a row. Eager to hit the front, the Italian attempted to overtake Takaaki Nakagami on lap five but suffered a fast crash in turn eight, Rossi unfortunately taking his rival down with him. Thankfully, Rossi was quickly back on his feet and able to check on his fellow rider, but he could not resume his challenge.

The NC result means Rossi stays in fifth position in the championship standings with an 88-point gap to first. Viñales on the other hand moves up from eleventh to seventh in the rankings, with a 95-point margin to the top.

Racing carries on next week, when the riders take on the Sachsenring for the German GP.

“It feels like I’m dreaming,” said Viñales. “These have been difficult times for me, because I’ve been out of the three tracks where I thought I had the most potential with the bike. My season has been difficult, but I’ve tried to keep the momentum from Catalunya, because I felt really good on the bike.

“I’m so grateful to the team, because they did a great job this weekend and prepared well for the last laps of the race. I was strong, even one-to-one on the brakes, I knew I could make the overtakes. It was very important to relieve some of the pressure by taking a victory. I think the team will be more relaxed now.

“Being back on the top step of the podium again feels really good and bringing Yamaha back to its winning ways is the most important to me. We knew we had the potential but hadn’t been able to show it. It’s always a combination between the team’s, the rider’s, and the bike’s efforts. Sachsenring is a track I’m usually fast at, so we’ll try our best.”