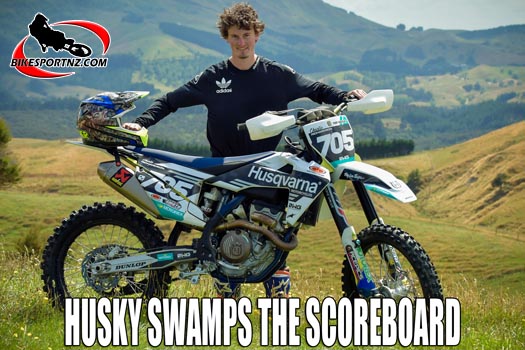 The Husqvarna bike brand continues to dominate the scoreboard after the weekend’s fourth of seven rounds in the 2019 New Zealand Enduro Championships in the Wairarapa.

Eketahuna rider Charlie Richardson (pictured here) took his Husqvarna FC250 to finish a close third overall at the event just south of Martinborough on Sunday, with a gaggle of five other Husqvarna riders following close behind him, meaning the distinctive white Husqvarna bikes filled out six of the top eight positions on the day.

Whanganui’s Seth Reardon (Yamaha) won the day, his first major victory at this level, with Manawatu’s Paul Whibley (Yamaha) claiming the runner-up spot, but the battle for manufacturers’ honours weighs heavily in favour of the popular and reliable Husqvarna bike brand.

Husqvarna riders have amassed a staggering 360 competition points over the four rounds thus far, swamping the scoreboard, with riders of KTM bikes earning 289 points. Yamaha is third best on the table, with 202 points.

It’s impossible to say yet which individual might win the Mitas Tyres and Yamaha-sponsored series outright because there have been four different winners in as many events so far this season.

Helensville’s Tom Buxton (KTM) won round one of the series near Whangamata in March, Cambridge rider Dylan Yearbury (Husqvarna) clinched the win at round two near Porirua in April and Thames rider Chris Birch (KTM) topped the podium at round three near Tokoroa two weeks later, with Reardon the latest to be the day’s hero.

Unfortunately for Richardson, he has been able to contest only two of the four rounds thus far and is therefore down in 13th overall for the series, but such is the depth of talent in this sport in New Zealand that any rider among the top 20 or so are capable of winning on any particular day.

“I had a pretty good day on Sunday,” said Richardson. “It was extremely slippery after rain there through the previous week, but I managed to stay clean and consistent and I got there in the end.

“I had a shocking day at the series opener, but my result at Martinborough has pushed me up the standings a bit,” said the 21-year-old shepherd.

The next round of the series is closer to home for Richardson, near Masterton in three weeks’ time, on June 29.

With scores from only six of the seven rounds to be counted – riders to discard their one worst result – the race for the championship win outright, and for the various class titles too, could still go down to the wire at the double-header final weekend, rounds six and seven, at Hokitika, in Westland, in July.