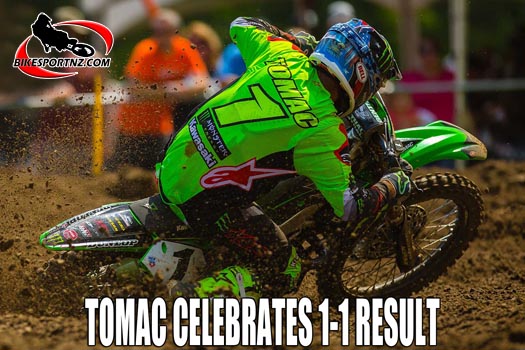 Fans at the Lucas Oil Fox Raceway National cheered on reigning champion and Monster Energy Kawasaki rider Eli Tomac as he celebrated a dominant first win of the season.

That result boosted Tomac into the championship lead, now four points ahead of round one winner Ken Roczen.

New Zealand’s Cody Cooper (Crown Kiwi Honda CRF450) qualified 25th at Pala, and then was credited with 29th and 38th (after completing just three laps) in the two 450cc races, good enough for 35th overall for the day.

Cooper is 22nd overall for the series after two rounds.

In the 250 class, Monster Energy/Pro Circuit/Kawasaki’s Adam Cianciarulo captured back-to-back victories to start the season and extend his point lead.

The opening 450 class moto of the day saw Blake Baggett emerge with the holeshot, but he was quickly passed by Team Honda HRC’s Roczen.

Championship points leader Roczen proceeded to set a torrid pace on the opening lap to establish a multi-second margin over the field.

Baggett settled into second on the opening lap but then crashed out of the position, which moved Jason Anderson briefly into second before he lost the position to Marvin Musquin. Just behind them, Cooper Webb gave chase from fourth, with Tomac fifth.

At the halfway point of the moto Tomac was able to capitalise on a mistake from Webb to move into fourth and set his sights on Anderson for third. The reigning back-to-back series titleholder faced a five-second deficit to third and successfully overcame that gap to drop Anderson off the podium. He then made a push to track down the top two.

With less than three minutes remaining in the moto Musquin was able to close to within a second of Roczen, while a hard-charging Tomac closed in from third. Soon all three were less than 1.5 seconds apart, and only got closer as the time wound down. Musquin attempted to make a pass on Roczen, but it didn’t work and instead opened the door for Tomac to take over second. The champ never let up as he stormed around Roczen before the completion of that same lap.

Tomac pulled away over the final laps to take the moto win by 3.8 seconds over Roczen, while Musquin followed in third. Anderson was fourth, while his rookie team-mate Zach Osborne was fifth.

As the riders emerged from the first turn at the start of the final moto it was Justin Bogle who earned the holeshot ahead of Musquin and Tomac.

Anderson, Baggett, and Roczen jockeyed for position behind them. Musquin was aggressive on the opening lap and attacked Bogle for the lead, with the Frenchman successfully making the pass. Tomac followed into second shortly thereafter, while Anderson moved into third right after they started the second lap.

The lead trio was able to settle into their positions, with Musquin establishing about a 1.5-second lead on Tomac. Anderson ran solidly in third, but Roczen kept him honest from fourth. Roczen applied persistent pressure for several laps and eventually made his move into podium position just before the halfway point, but was nearly 10 seconds behind the leaders.

Tomac’s impatience grew as the second half of the moto unfolded and he began to force the issue with Musquin. The Frenchman responded, but Tomac made a determined pass to grab control of the moto with just over 10 minutes to go. The champ was able to inch away from Musquin from there. Behind them, Roczen received heavy pressure from Osborne, but the German withstood the challenge.

Out front, Tomac ran the closing moments of the moto all by himself and took an emphatic moto win by 11 seconds over Musquin, with Roczen finishing third.

It’s Tomac’s first 1-1 sweep since the ninth round of last season at Washougal, and marks the 18th win of his 450 Class career, tying him for sixth all time with Kent Howerton. Musquin (3-2) and Roczen (2-3) ended up in a tie for the runner-up spot, but the better second-moto result gave the Frenchman the tiebreaker.

“That second moto was really comfortable [on the bike]. It was really clean at the end,” said Tomac, who moved into the point lead with the win. “Marvin [Musquin] had a really good pace going there, and about halfway I was able to put pressure on him and make a really good pass. Once I got out front I was able to ride loose, picking good lines, and carried on to the win. We’re in a great position now [with the championship], so we’re right where we want to be.”

Tomac entered the day facing a four-point deficit to Roczen, but leaves with a four-point lead over the German. Musquin moved into third, 19 points out of the lead. 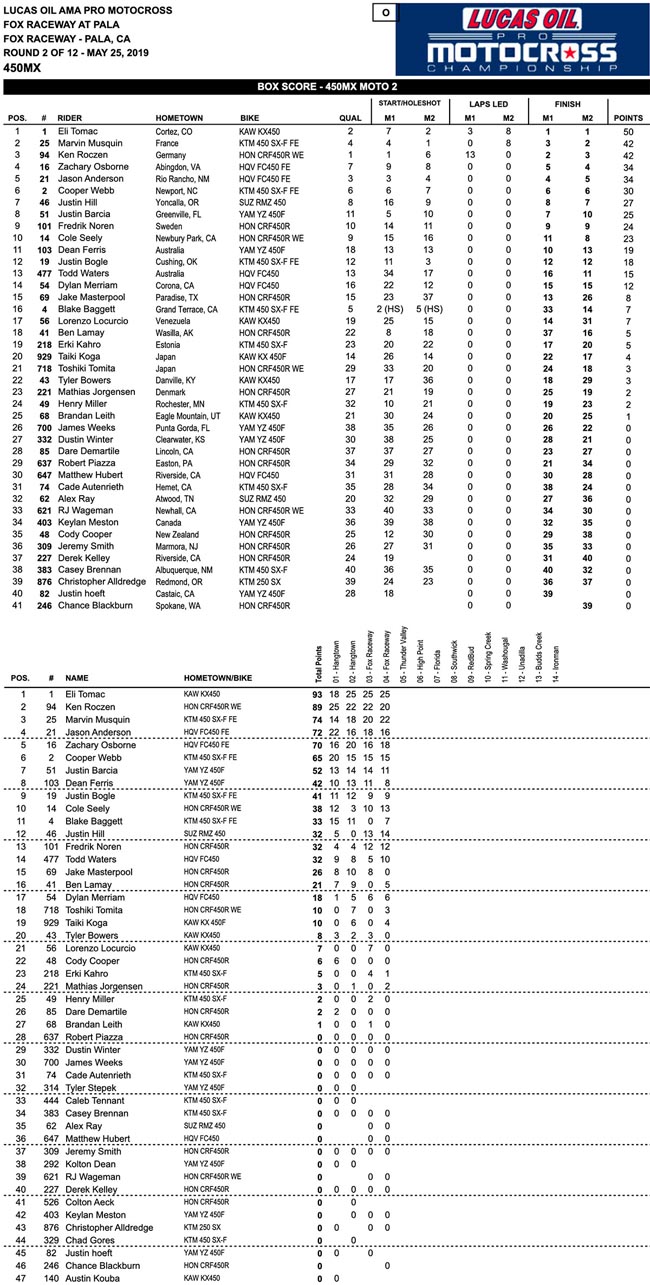 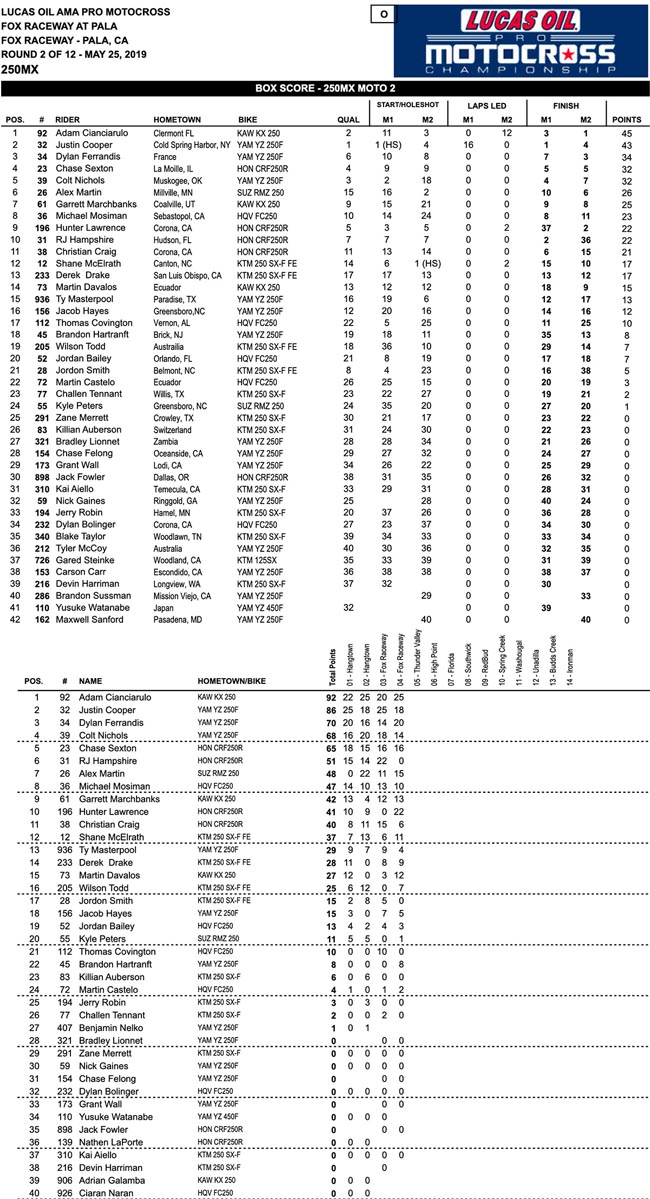