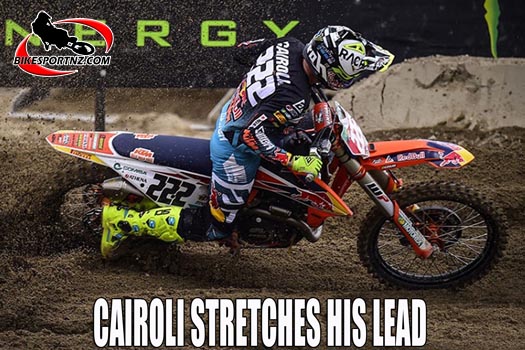 The fifth round of the 2019 FIM Motocross World Championship in Mantova, Italy, was one to remember. While the rain continued to fall at the MXGP of Lombardia, Red Bull KTM Factory Racing’s dynamic duo of  the 33-year-old Cairoli and Spain’s Jorge Prado reigned in their own right taking the respective MXGP and MX2 category overall wins this weekend.

But most focus was on the MXGP class where Cairoli’s biggest competitor as of late, Tim Gajser, had a good jump off the line but lost traction on the front of his Honda heading into turn one, which sent him over the bars, along with several others.

While Cairoli had the lead from the first turn fellow Italian Ivo Monticelli and his KTM team-mate Max Anstie were in second and third. A mistake from Monticelli saw Anstie go past almost taking both down, while Cairoli tipped over just a corner later. The bobble from Cairoli put Anstie on the Sicilian’s rear wheel but, quick to recover, Cairoli pulled back away again.

Gajser’s race one went from bad to worse when he was clipped by another rider midair causing the Slovenian to resample the soil. The strong riding of Monticelli in third was all for nothing when his bike gave out just as Pauls Jonass took the spot halfway through the race.

More crashes from Gajser held him to 10th while both Jonass and his Arminas Jasikonis passed Anstie. The first chequered flag then went out with Cairoli taking the win 10 seconds ahead of Jonass, Jasikonis, Anstie, and Belgian Clement Desalle who rounded out the top five just ahead of Frenchman Gautier Paulin.

Race two again saw Cairoli with the FOX Holeshot, his 7th of 2019, while Gajser came away clean but behind Cairoli was Paulin and Brian Bogers. Monticelli again had bad luck crashing in turn two and pulling out of the race.

Not long after Monticelli’s mishap, Anstie crashed together with fellow Briton Shaun Simpson. With Anstie also pulling out of the race, Glenn Coldenhoff ran in 5th position.

Bogers took over second from Paulin early in the race with Jonass also getting past Paulin. Jasikonis, unlike Jonass, was unable to match his strong race 1 result as he fought from 23rd on the first lap up to 15th by the finish.

“It is very nice to be again in Italy, despite the weather there were a lot of people today, so I am very thankful they keep coming and keep cheering,” said cairoli.

“I am really happy of course, thanks to all the team for their hard work again and I am looking forward to next week in Portugal which is another track that I really like.”

Several riders were caught in a first turn pile up however including Calvin Vlaanderen, Henry Jacobi and Mitch Evans. Michele Cervellin and Jago Geerts were both quick to get past Vialle and take over 2nd and 3rd while Prado led.

Vialle’s race only worsened as he fell and remounted in 18th before losing even more spots. On the contrary it was the red plate holder, Thomas Kjer Olsen, who improved as the race went on. Olsen was around 23rd on the opening lap but by lap five had already made his way up to 8th.

Cervellin then lost his 2nd position to Geerts and another to Australian Jed Beaton before the Italian’s bike came to a halt. Olsen decided to take advantage of his gap and use the new goggle lane for a fresh set of vision before passing both Iker Larranaga and Maxime Renaux for 6th.

With Olsen back in 6th Prado took the race and gained 10 points in the championship standings while Geerts came across the finish 5.8 seconds later in 2nd ahead of Beaton, Davy Pootjes and Bas Vaessen.

In race 2 Vialle got the better of Prado for the Fox Holeshot with Pootjes in 3rd. Prado made his way past Vialle before the end of the lap however. Olsen then passed Pootjes to get into third along with Jacobi but Pootjes quickly retook 4th from the German.

Olsen and Pootjes went on to pass Vialle while Beaton had a hard crash in 6th place. Jacobi’s bike then gave out just like many others as a result of the demanding conditions while Prado took the win ahead of Olsen, Vialle, Pootjes, and New Zealand’s Dylan Walsh.

The undefeated overall winner for the 4th time this season was Jorge Prado while Olsen took 2nd and Pootjes achieved his first career podium finish. The win from Prado was not enough to take over the red plate from Olsen but the gap now drops from the previous 20 points to only 7.

“It is great to come back, get on the podium, and winning the GP was very important for me, especially for my confidence after a month off,” said Prado.

“Today it was important to get a good start, I failed at that yesterday but today I got really good starts which were key to the race. It is very tough to not make mistakes, get good starts every time, and don’t crash, I just need to keep concentration to lead.”