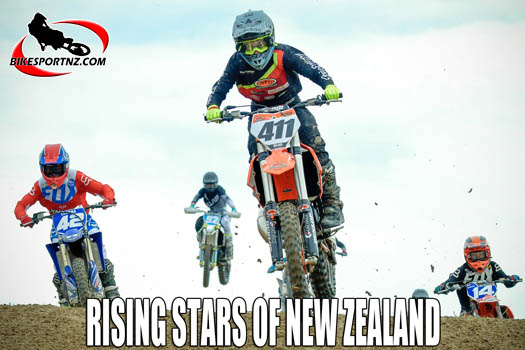 The rising stars of motocross will be out in force for the 2019 New Zealand Junior Motocross Championships near Palmerston North this weekend (April 27-28).

With national titles and trophies to entice them or international careers beckoning for the young elite of New Zealand motocross, the racing is expected to again be of the highest calibre, perhaps forecasting who might become the next New Zealand contender for world championship honours.

Hosted by the Manawatu Orion Motorcycle Club and jointly sponsored by Lucas Oils and Alpinestars, this weekend’s event will run over three days, with qualifying early on in the Friday programme.

Racing is at the Flipp’s Track at Himatangi, off Omanuka Road at Oroua Downs. The sandy track there was used for the senior nationals a couple of seasons ago and is a popular venue for regular Manawatu club events. 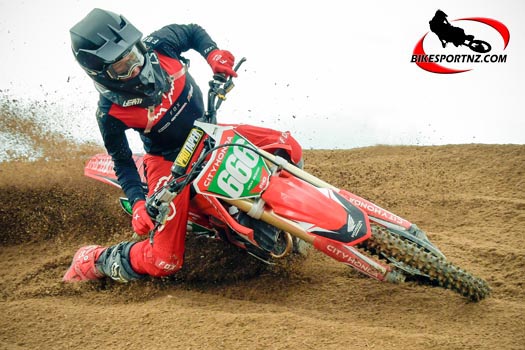 Foxton’s Locky McKean (Honda), who will be pushing for points in the 14-16 years’ 250cc class this weekend. Photo by Andy McGechan, BikesportNZ.com

There are seven races scheduled for each of the various bike and age-group categories and the riders’ hunger for glory will be such that it’s unlikely there will be any crumbs left on the table when the racing winds up on Sunday afternoon.

The event will also incorporate the inaugural Motorcycling New Zealand Interclub Challenge (with the Bryan Davidson Memorial Trophy on offer).

Each club will nominate three riders to represent them in this parallel competition.

Several of last year’s stand-out riders in the premier category – the 14-16 years’ 250cc class – will have graduated to the senior ranks over the past months, meaning it will again be extremely difficult to pick the likely winners this time around.

However, it goes without saying that clear favourite for the premier the 14-16 years’ 250cc class is last year’s winner in this class, Dunedin’s Grason Veitch, back to defend his crown, while riders expected to challenge him this time around include Whanganui’s James Rountree, Pukekawa’s Jack Dunlop and Rangiora’s Korban Paget.

Kiwi international Brodie Connolly, from Tauranga, is still recovering from injury and won’t be lining up at the junior nationals this year.

Former motocross world champion Shayne King, from New Plymouth, has two sons lining up to race this weekend and he believes this event can be a “great stepping stone” to senior domestic or even world championship glory in later years.

“New Zealand motocross riders have a great reputation overseas and winning at junior level at home can certainly be a boost to any rider wanting to travel and race abroad,” said King.