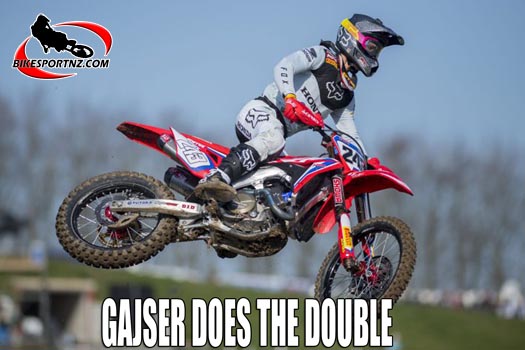 It was back-to-back wins for Slovenian Tim Gajser at the 2019 MXGP of Trentino, Italy, at the weekend, but Italian Antonio Cairoli still leads the title chase.

Spain’s Jorge Prado won MX2 class overall, while New Zealand’s hDylan Walsh had to settle for 26th overall for the day after finishing 21st and 23rd in the two 250cc races.

As the first sessions hit the track and the stars of MXGP took to Trentino, the crowd came to life. The majority of the fans cheering were for Italian motocross hero and Red Bull KTM Factory Racing rider Cairoli but, in similar fashion to rivals playing a football match, Cairoli’s main competitor, Team Honda’s Gajser, had his own fans who made the trip from neighbouring Slovenia cheering just as passionately.

When MXGP race one got underway Cairoli took the holeshot and led, but Gajser was in around fifth. Cairoli’s fellow Italians, Gebben Van Venrooy Kawasaki’s Alessandro Lupino, and Standing Construct KTM’s Ivo Monticelli were second and third, ahead of Monster Energy Wilvo Yamaha MXGP’s Gautier Paulin.

Gajser was quick to make moves taking fourth from Paulin in turn three, then he took third from Monticelli in the next turn before getting past Lupino for second in the first half of the opening lap. Gajser’s high tempo put him just behind Cairoli where he latched on and eyed the lines of the Sicilian.

Monticelli meanwhile took 3rd from Lupino who dropped another spot to Paulin not along after. Paulin then worked his way past Monticelli to get into 3rd but Cairoli and Gajser were already long gone. Cairoli held the gap to Gajser at about 2 seconds for multiple laps but Gajser closed in as the laps ticked away and dropped the gap to within one second to apply pressure to the 9-time world champion.

On the 16th lap of 19, a bobble from Cairoli was all that Gajser needed to take the lead away right in front of the Slovenian fans who cheered at the top of their lungs. Cairoli tried to retaliate quickly but a confident scrub and look from Gajser kept the Sicilian at bay. In the remaining three laps Cairoli continued to push to get Gajser back but it didn’t work and the Slovenian crossed the line only 1.081 seconds ahead much to the pleasure of not only himself but, also the corner lined with his fans. Paulin took 3rd another 53 seconds further back of the leaders with Monster Energy Wilvo Yamaha MXGP Team-mate Arnaud Tonus 4th and Monticelli 5th.

Race two was off to a good start for Gajser taking his first holeshot of the year. Cairoli was close in second, with the two Wilvo bikes of Paulin and Tonus again 3rd and 4th. BOS Factory’s Tommy Searle was in 5th a short moment before losing spots to the two Standing Construct KTM riders of Max Anstie, who didn’t finish race one, and Ivo Monticelli.

All eyes were on the two at the front with Gajser creating a slight gap only to be taken back away by Cairoli. On the ninth lap a miscue from Gajser saw Cairoli go past along pit lane and across the finish line. With the Italian crowd on their feet Cairoli tried to pull away from the Slovenian but Gajser wasn’t having any of it as he took the lead back five laps later in the same spot which he had lost the position earlier.

With two laps to go Cairoli returned the favour again in front of pit lane to the Italian fans roar and the teams nervous yet enthusiastic looks. Two mistakes from Cairoli would however decide the race as the pair pushed the limits of both each other and their factory race machines. Cairoli’s first mistake took him out of the preferred line and the next only a few meters later resulted in him losing the bike and lead.

Cairoli got back up but Gajser was in the clear leading the final two laps to the win, his first since Leon, Mexico in 2017. Gajser’s emotion excitement and pure joy were unmistakable as he dropped his bike and ran thank the Slovenian fans lining the fences for the support. Cairoli finished 24 seconds later and congratulated Gajser as the headed to the podium joined by Paulin in third.

The amazing racing and perfect weekend capped off by winning at Trentino for only the second time in his career, the first was actually his first ever MX2 win back in 2015, left both Gajser and Team HRC ecstatic.

Even though the MXGP class hosted many of the fan favourites the atmosphere for the MX2 races was just as electric. MX2 racing started off with Red Bull KTM Factory Racing’s Jorge Prado taking his fourth holeshot of the year and leading BIKE IT DRT Kawasaki’s Darian Sanayei.

Rockstar Energy Husqvarna Factory Racing’s Thomas Kjer Olsen was in fifth position before he fell on the first laps then and had work his way back into the lead group. Sanayei faded quickly as he continues his battle with Epstein Barr virus.

Geerts and F&H Racing Kawasaki’s Henry Jacobi got past Larranaga in the first half of the race and the Spaniard continued to lose spots as the action went on including one to Olsen who then took back the 5th position he fell out of earlier from Honda 114 Motorsports’ Mitch Evans.

Prado was long gone in the lead and took the race win by over 12 seconds while Geerts made a last lap pass into second for the second weekend in a row. Vialle came across the chequers in third, followed by Jacobi, Olsen, and Evans.

MX2 race two was off to another picture-perfect Prado performance with the holeshot, now his fifth of 2019, and 19 laps in the lead. The racing behind Prado was intense though after a first turn pileup.

Vialle again was 2ndat the start of the race and had Jacobi along with BUD Racing Kawasaki’s Brian Moreau right in tow. Geerts was in 6th at the beginning but passed Olsen and got into 4th a few laps in.

Jacobi made a mistake and dropped from 3rd to 6th which put Geerts in the position to pass Vialle we he did at the halfway point. Olsen also made it by the young Frenchman to get into 3rd. Monster Energy Kemea Yamaha Official MX2’s Ben Watson got into 4th then put a last lap pass on Olsen to finish 3rd.

Prado’s domination was impressive taking the Qualifying win yesterday, the two race wins today and the overall, all by substantial margin. Geerts’ 2-2 put him on the podium for the second round in a row while Vialle’s 3-6 took the final podium position, his second this season as well.