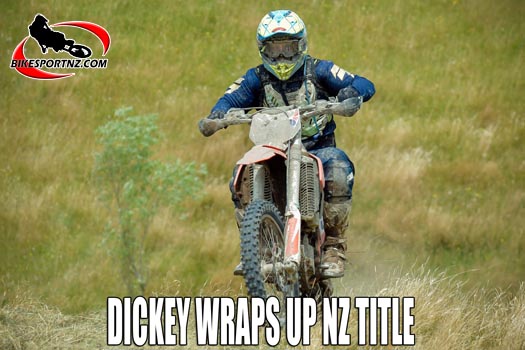 With an unbeatable three wins from three starts, KTM rider Jason Dickey has his hands on the 2019 New Zealand Cross-country Championships title with a round to spare.

There is still the fourth and final round of the series to come in six weeks’ time and, although there is nothing left to prove, the 24-year-old dairy farmer from Raglan has now set himself a fresh target, to make it a clean sweep of wins this season.

Only three of the rounds are counted, as riders discard their one worst result, so Dickey’s 1-1-1 score-card thus far means the chase for the coveted senior title is over for 2019, but he didn’t have everything go his own way at the penultimate third round of the series in Marlborough on Sunday.

A snarl-up near the start of Sunday’s gruelling three-hour race left Dickey (KTM 350XC-F) with plenty of work to do.

“It was a pretty eventful day for me actually,” said Dickey.

“I was last off the start line and got caught up in a pile-up in the first gateway. Then I got tangled in a fence and was behind about two-thirds of the field.

“I was making a charge through the pack when I hit a rock on a steep uphill and almost crashed. Then I lost my clutch when the bleed screw came loose … probably a result of everything else that had happened to me. And this was all within the first lap.

“So I was left to complete the three-hour race with no clutch,” he shrugged.

“I was well back from the leaders, but pushed really hard and had taken over the lead before the end of the first 22-minute lap.

“The course was very rocky, but I managed to avoid getting flat tyres by having double tyre tubes and putting a bit of extra air pressure in them,” he explained.

“I had a great battle with Brandon Given (from Raglan) and Sam Brown (from Glen Murray), until Sam had to pull out with a flat tyre.

“My pit crew were great. My stop to refuel near the end was very quick and I didn’t lose my lead. After that I just rode safely to avoid any silly mistakes or crashes and took the win.”

Eventual runner-up on Sunday was Given, crossing the finish line a minute behind Dickey, with Taupo’s Nathan Tesselaar, Whanganui’s Seth Reardon and Eketahuna’s Charlie Richardson completing the top five.

In terms of the championship standings, Given and Reardon currently share second spot and that battle will go down to the wire at the final round near Taupo on May 25.

The junior riders had their 90-minute race earlier in the day and there it was Raglan’s Coby Rooks who celebrated his second win of the series.

Rooks and Eltham’s defending national junior champion Adam Loveridge have shared the wins this year – Rooks the junior race winner at round one near Norsewood in February, while Loveridge won at round two near Mosgiel in March – and Rooks is on top of the championship standings, albeit with only a slim five-point advantage.

Taupo’s Wil Yeoman finished third on Sunday and he is also third in the series points after three rounds.

“It was very demanding, with lots of rocks to keep the riders on their toes. There were a few flat tyres and a few bent wheel rims too, but no dust to cause any visibility problems. It all went really well and I think everyone enjoyed the racing.

“The racing in the juniors was particularly close, with the leading riders never far apart. The final round will be very exciting.”

The series is supported by The Dirt Guide, Oakley goggles, Bel Ray oils and Michelin tyres.

Round Four: Saturday May 25 – Taupo MCC