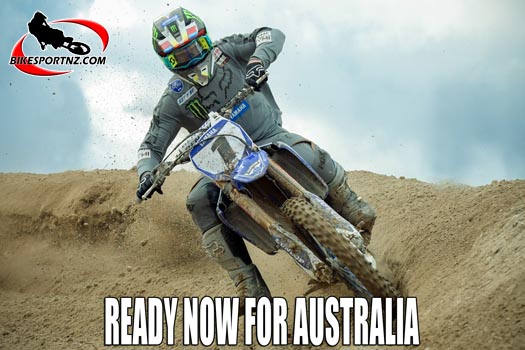 It was mission accomplished for the Altherm JCR Yamaha Racing Team this season and two of their riders have now headed to Australia in a confident mood.

Although the three talented individuals who make up the rider’s roster did not manage to clinch New Zealand titles for themselves this season, they did achieve one of their key aims, to hone and sharpen their skills ahead of their respective Australian motocross nationals campaigns.

The action was close in Sunday’s racing at the fourth and final round of the Fox-sponsored New Zealand Motocross Championships at Taupo’s Digger McEwen Motocross Park and each of the Altherm JCR Yamaha Racing Team riders – Kirk Gibbs, Kayne Lamont and Maximus Purvis – ended the series on a podium.

Gibbs and Purvis now switch their focus to the 10-round Austrtaian MX Nationals, which kick off at Appin, west of Sydney in New South Wales, tomorrow (March 17).

Either first or second in every race this season, Gibbs was in striking distance of MX1 class series leader Cody Cooper at the start of Sunday’s racing at Taupo, while Yamaha team-mate Lamont was in the No.3 position.

Though Gibbs won one of Sunday’s three MX1 races (and was runner-up in the other two), he still ended up a frustrating six points short of his target, while Lamont remained solid in third and that was the final podium for the series.

MX2 (250cc) class rider Purvis was in a similar position, sitting in the runner-up spot in the class and leading the MX2 battle-within-a-battle for Under-19 age group honours.

When a mechanical glitch prevented Purvis from finishing one of his three races on Sunday, his campaign was dealt a cruel blow and he ended up slipping to third overall in the MX2 class and forced to accept the runner-up spot in the Under-19 calculations.

“I felt a little bit off today,” said Gibbs. “Unfortunately I came off second best for the championship. I respect Cody (Cooper) and I think the best man won today. I probably needed a points buffer coming into today because Cody really rides well here at Taupo.

“But I’m really happy with the way I’m riding and I will hopefully take that with me to Aussie and I can win there.

“I feel ready for Australia. I feel confident. It’s been a long time since I’ve felt like this.”

Purvis will also shortly head across the Tasman Sea, where he will ride for the WBR Yamaha Team and tackle the under-19 Motocross Development (MXD) class in the Australian nationals.

The Kiwi motocross international is already well familiar with what’s ahead of him in Australia after he finished third overall in the MXD class there in 2018.

Lamont spent the entire New Zealand series recovering from a pre-season injury and so he was perhaps never really expected to challenge for the MX1 title this year, although he did show remarkable speed and dogged determination to consistently finish among the top three. He will not be racing in Australia this season.

“It didn’t quite pan out again this year. We’ve been close … even last year too when we were leading the MX1 championship with Kayne (Lamont). I’m proud of and happy with the guys. There were good vibes and we finished on the podium with all the riders. It would have been nice to get that MX1 title though.

“In MX2 it was Max’s first year. Remember he was 125cc class champion last year, but it’s a big step up to the MX2 class. I’m happy with his performance though. Like always, there are plenty of things I want to improve on. It’s the best I’ve seen Cody (Cooper) ride and so congratulations to him and to Honda.

“We’ll be back next year … bigger, better and stronger. I don’t see us changing our riders at this stage.”