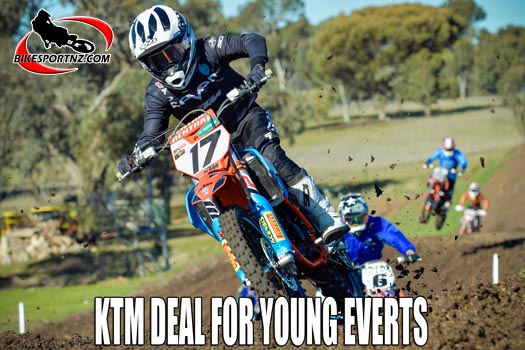 Promising Belgian youngster Liam Everts will officially become part of the KTM racing division from 2019 in an agreement that should see the latest generation of a famous family dynasty make his path up the motocross ladder to Grand Prix.

Everts, aged 14, has evolved as a racer in the last year, and his speed in just a second term with an 85cc motorcycle led to a third place finish in the EMX85 European Championship.

While Liam is able to count on the expertise and peerless achievements of his father Stefan Everts – who is currently recovering from illness – he can also rely on the advice from four-times world champion and grandfather Harry Everts as well as his mother, Kelly, who was so central to Stefan’s motocross efforts as he laid siege to all classes of the FIM Motocross World Championship.

The Everts’ will operate out of their own structure in 2019 as Liam prepares for his first season with the KTM 125 SX; the motorcycle with which Rene Hofer scored victories and red plates as EMX125 European Championship leader in 2018.

“It feels like an honour for me to ride with KTM because it feels like they are the best brand in motocross,” said Liam Everts.

“We have a long deal in place but I have been on a KTM for a while now and I love the bike; it’s amazing how it handles and how it fits my style. To get this contract is great. I’m really happy and I’m really looking forward to the future. Hopefully we can make some nice things together, we’ll go step by step and build along the way.”

Robert Jonas, the VP of Offroad, said: “Liam comes from one of the best family names in motocross and while that also gives him an advantage it also brings pressure, but we’re excited by what we have seen from him so far. It’s clear the progress he has made with his pace and technique in 2018 and that points to even more potential. It is still early but he could go all the way. Liam is clearly making the commitment to racing at the highest level while looking at the next steps to get better and to enjoy success, so we’re really happy to be there with him.”