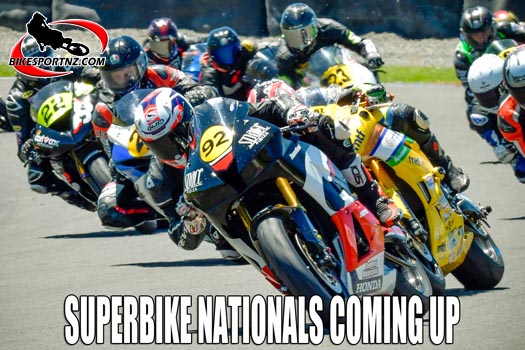 It is bound to be another scorcher on the tarmac this summer with the New Zealand Superbike Championships now expanded to five rounds, two events in the South Island and three north of the Cook Strait ferry terminal.

Last season’s four-round series provided racers, sponsors, supporters and fans alike with edge-of-the-seat racing throughout the competition, but 2019 looks set to provide even more nail-biting fury, with an additional weekend of action expected to stretch raw nerves even closer to breaking point.

The 2019 nationals kick off at Mike Pero Motorsport Park, Christchurch, this coming weekend, on January 5-6, with rounds to follow at Timaru’s Levels International Raceway on January 12-13, then there is a month break before racing resumes with round three at Hampton Downs Motorsport Park, near Huntly, on March 2-3 (incorporated into the popular MotoFest spectacular).

After that, the riders head back down to Manfeild Circuit Chris Amon, at Feilding, on March 30-31 and, finally, the series all wraps up at Bruce McLaren Motorsport Park in Taupo on April 5-7.

Most eyes will no doubt again focus on the premier superbike class, where Wellington’s defending champion Sloan Frost and Whakatane brothers  Mitch and Damon Rees are perhaps expected to clash, while others likely to challenge include such individuals as Taupo’s Scotty Moir, Glen Eden’s Daniel Mettam, Christchurch brothers Alastair and James Hoogenboezem and Rangiora’s Supersport 600 class champion from last season, Jake Lewis, to name a few.

It’s certainly a class overflowing with talent in 2019.

Waimakariri’s Avalon Biddle finished third overall, behind Lewis and James Hoogenboezem, the Supersport 600 class last season and she has the capability to step further into the limelight.

Motorcycling New Zealand road-racing co-commissioners Greg Percival and Grant Ramage both said they were excited about the season ahead.

“There are a lot more points up for grabs this season, with the extra round now, and it’s vital for riders to score well at each round if they hope to win a title,” said Ramage.

“It’s really important for riders not to crash now too. A rule brought in a couple of seasons ago means that riders may not just pick up their bike and continue after crashing.

“We have tightened up too on jump starts and we now video the starts to use as evidence of this. We have made some technological advances too with machines being examined regularly during the series to ensure there is no tampering or cheating and fuel is also being tested.”