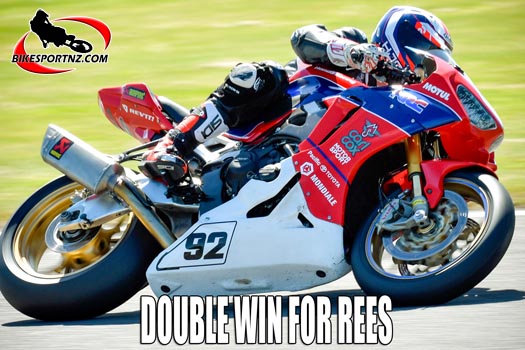 It was a superbike debut at Ruapuna for Damon Rees at the weekend, but his results certainly gave no indication of that.

The Honda star from Whakatane was untouchable in this premier class at the first round of five in the 2019 New Zealand Superbike Championships at Mike Pero Motorsport Park (Ruapuna) at the weekend and he has quickly established himself as the man to beat with the riders now heading to Levels International Raceway, near Timaru, for round two of the series next weekend.

It was the first time for Rees on a superbike at Ruapuna, but he qualified his Carl Cox Motorsports Honda CBR1000SP on pole early on Saturday, despite crashing during the session.

“I just lost the front end and went down. Luckily for me I had already done enough during my first flying lap to earn pole position,” he said.

Later that afternoon, he led from start to finish in the first of three superbike races planned for the two-day event.

He crossed the line an impressive 6.5 seconds ahead of the runner-up rider, Christchurch man Alastair Hoogenboezem, that result sending an early warning shot to his superbike rivals.

The 23-year-old Rees had more of a fight on his hands in race two the following day, with a “train” of seven riders battling for the lead.

Positions at the front changed hands several times before Rees could again break through and then break away.

“I had a terrible start in that second race and, with riders to my left and to my right, it was quite a battle. It was very busy.

“I got to the front and then pushed hard to create a gap. I was actually deteriorating physically near the end, struggling with my sore shoulder, but I held on for the win” he said, still feeling the effects of a crash last month.

Runner-up to Rees in race two, crossing the line 4.5 seconds behind, was his elder brother, Mitch Rees.

Unfortunately for Damon Rees, he never got the chance to further bolster his overall points advantage with the event cut short following a major oil spill during the weekend’s second of three sidecars races, shortly after midday on Sunday.

The event organisers decided, “in the interests of rider safety”, that the meeting was “declared” and further racing was therefore cancelled.

Damon Rees now enjoys a 15-point advantage at the top of the superbike class standings.

Hoogenboezem (Yamaha R1) ended the weekend on the second podium step for the superbike class, thanks to his 2-3 score-card, while Mitchell Rees (Honda CBR1000SP) finished 4-2 to claim the third podium spot.

What makes Damon Rees’ performance all the more remarkable is that he is a virtual novice on a 1000cc bike after making his superbike debut only last season, at round three of the nationals at Hampton Downs in March.

He celebrated his maiden superbike race win at round one of the pre-nationals Suzuki Series event in Taupo in December.

Rees was New Zealand Supersport 600 champion in 2017 and already he seems on the right track to claim the superbike crown this season.

No result was registered for the Supersport 600 class – their race on Saturday was red-flagged, after a rider had crashed, and the sidecars oil spillage happened just prior to their first race on Sunday.