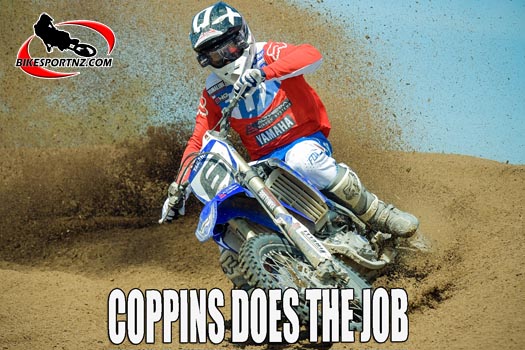 Motueka’s Josh Coppins may be a hard task master, but he must surely be satisfied with what was achieved from the assignment that he gave to himself at the weekend.

The former world championship motocross campaigner has long been retired from fulltime racing and he is fully occupied these days with running the high-profile Altherm JCR Yamaha Race Team, the 41-year-old only an occasional racer and certainly no longer expected to be giving the hurry-up to New Zealand’s young brigade of “rising stars”.

But, when he was faced with not having a rider for his team’s MX1 class Yamaha YZ450F bike at the weekend’s big annual Whakatane Summercross, he did the next best thing … he dusted off his helmet and boots and rode himself up to the start line.

He then proceeded to lead each of Sunday’s MX1 races from the start, eventually succumbing to pressure from multi-time national MX1 champion Cody Cooper and fellow Kiwi international Rhys Carter – and, of course, his own “lack of race fitness” – but Coppins still ended the day on the podium for this glamour class.

Coppins finished with a 3-4-4-3-4 score-card for the day, clinching the third step on the podium and finishing just ahead of Taupo’s Cohen Chase (Eni Lubricants Kawasaki) another Kiwi international and new Yamaha rider, Reporoa’s Hadleigh Knight.

Coppins’ decision to ride, “just to keep the seat warm for our injured MX1 rider Kayne Lamont”, obviously paid dividends, although a modest Coppins typically downplayed his own performance.

“The track was tough today. It didn’t really suit me. But, in saying that, I had to ride to my fitness, which wasn’t really good enough. But I was happy to represent the brand and represent the sponsors.

“The last time I seriously raced a motocross was in June or July at Mercer. I’d like to race more often but I can’t with my role as a team manager now. I was just keeping the seat warm while Kayne was missing.

“I’m really happy with Rhys’ performance too,” said Coppins. “He’s only six days back on a bike after injury.

Carter said he was also pleased with his own performance, saying “it’s good just to get a reference.

“I knew the speed’s not quite there, but it was better than what I thought it was going to be. There are a few things I know that I’ve got to work on,” said the 29-year-old Carter.

“So now I’m looking ahead to the King of the Mountain motocross (in Taranaki on January 19-20) and then the Woodville GP (at the end of January), followed by the nationals,” said Carter.

It’s going to be a hot season ahead for all of these riders, but Coppins said he was in a positive mood for what that might bring.

“We are going to boost our team’s MX1 strength when Kayne (Lamont) comes back from injury and also with the arrival of Australian Kirk Gibbs for the New Zealand Motocross Grand Prix at Woodville and then the motocross nationals (which start in February). We’ll be super strong there and take it to Coops (Cody Cooper),” said Coppins.

“I’m impressed too with Hadleigh Knight. He’s a customer who has decided to jump on a Yamaha and we’ve helped him a bit. He rewarded us today with a great result.”