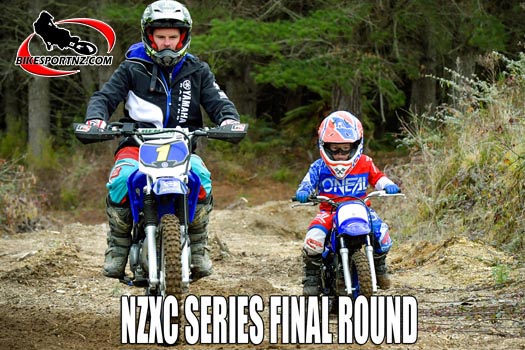 Taikorea’s Paul Whibley may currently be injured and out of action, but his Yamaha NZXC Series will carry on regardless, the final round set for the King Country this Saturday.

The 40-year-old former NZXC Series winner, former New Zealand cross-country champion and a former two-time outright winner of the Grand National Cross-country Championships (GNCC) in the United States (in 2009 and 2012), Whibley has nothing left to prove on the race track, but that doesn’t mean he has been sitting idle.

The Manawatu man created the Yamaha NZXC Series four years ago, in June 2015, intended as “a competition to better-prepare rising Kiwi stars for a life of international race action” and his series is now regarded as one of the best off-road series in New Zealand.

“My intention was not to simply add more events to the calendar, but to use some events that were already there and combine them into something different,” said Whibley.

“I’ve chosen the best of the bunch, piggy-backed onto them and called it the Yamaha NZXC series.”

Which explains why Saturday’s event at Waimiha doubles also as the final round of the parallel-but-separate New Zealand GNCC Series.

“I was looking at what younger guys need for when they venture overseas and some of the events in New Zealand were not really preparing them for what they’ll face.

“Racing over farmland is not really the same thing as riders will hit when they get to America or Europe. Forestry courses more accurately reflect what they will strike,” said Whibley.

This Saturday’s sixth and final round of the 2018 edition of the Yamaha NZXC Series is scheduled for the Pureora Forest, near Waimiha and Benneydale, a venue that should test even the most skilled and resilient of riders.

Yamaha ace Callan May leads the series after the five rounds thus far, the electrician from Titirangi in impressive form and a massive 36 points ahead of Whanganui’s Seth Reardon (Yamaha YZ250FX) at the top of the Yamaha NZXC standings.

The 26-year-old May took his Yamaha YZ250FX to win the first two rounds of the series, but he was then forced to settle for runner-up finishes, both times behind friend and rival Sam Greenslade at the two rounds that followed, at Woodhill Forest and Matata, in September and October respectively.

May was again runner-up at round five in November, this time behind Helensville’s Tom Buxton, but even that second-place performance could be classed as remarkable, with May having to charge through the entire field after a poor start, the race set in a damp a treacherous Riverhead Forest, west of Auckland.

Is will be that same style of strength and tenacity that should enable May to clinch the series’ main trophy this Saturday afternoon.

The venue for this weekend’s finale is 741 Ongarue Stream Rd, Waimiha, with the 90-minute combined junior and mini bike race set to blast off at 9.30am, followed by the two-hour senior race at 12 noon.

The junior and mini track is six kilometres long, while the seniors are expected to conquer a 20-kilometre track.

Taupo’s Wil Yeoman (Yamaha YZ125) leads the junior grade by 29 points over Tirau’s Alex Butler after five of six rounds and so he too is well on target to win the junior trophy outright.