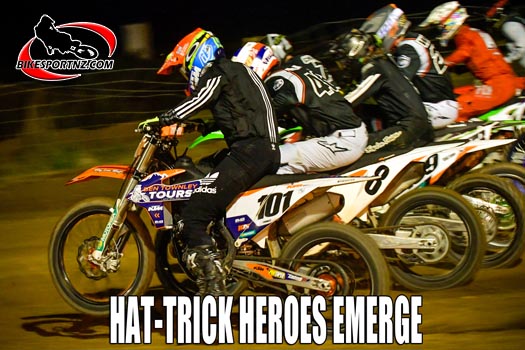 A handful of unbeaten performances lit up the night sky at a damp round one of the New Zealand Supercross Championships at Tokoroa on Saturday.

Four of the five championship classes were dominated by just one rider at the South Waikato Motorcycle Club’s circuit at Amisfield on Saturday night, although, in each case, results were never really certain until the final laps, with thrilling cut-and-thrust racing a feature of the night.

Oropi’s Ben Townley (SX1, open class), Mount Maunganui’s Josiah Natzke (SX2, 250cc), Ohaupo’s Carlin Hedley (SX Lites, 125cc) and Rangiora’s Korban Paget (Junior 250) each recorded a hat-trick of wins in their respective classes, perhaps setting the tone for how the championships might wrap up at the second and final round at Winton, near Invercargill, in two weeks’ time.

In the remaining championship class, the Junior Lites, it had looked like Hamilton’s Nicholas Westgate would take charge after he won the first two of three races on the night, but then visiting Czech Republic rider Julius Mikula won the final race, while Westgate managed only seventh, causing something of a boil-over.

Westgate’s brother, Dylan Westgate, finished with a 2-3-2 score-card on the night and this was enough for him to end up level on points at the top, only losing out to his sibling rival on a count-back, while a 3-2-4 score-card from Rongotea’s Rhys Jillings earned him the third podium spot, just ahead of Mikula.

Townley, who was national SX1 champion in 2016 but a non-starter last season, battled early on with fast-starting Taupo rider Cohen Chase, but once in front, Townley was never threatened.

Nelson’s Reece Walker earned the third spot on the night’s SX1 podium with a solid 3-2-3 score-card.

For the senior SX2 class riders, the Tokoroa event was actually round two of the nationals after the inaugural S-X Open Auckland, the international event that was held at Mt Smart Stadium the previous weekend, registering as round one for them.

Natzke had been the best-performed of the Kiwi riders at Mt Smart Stadium and so he therefore arrived at Tokoroa with 17 points already in the bank, while Waitakere’s Ethan Martens turned up with 15 points to his credit and Te Puke’s Logan Blackburn had 13.

Natzke’s three wins from three starts at Tokoroa then pushed his advantage out from three points to 15 over Martens, who managed 3-3-2 at Tokoroa, while Mangakino’s Maximus Purvis captured the third podium position with a 4-2-3 score-card on Saturday night.

Motorcycling New Zealand supercross co-ordinator Noel May was thrilled with the rider turn-out at Tokoroa.

“It was pretty awesome,” he said.

“About 18 months ago we had a meeting in Taupo and came up with a strategic plan to build a pathway for the riders, rebuilding the juniors, so that they feed into the seniors in the future and what we saw here at Tokoroa absolutely kick-started that.

“Entry numbers were up 40 percent on last year and we had more support classes here too. I want to tip my hat to the Junior Lites and Junior 250s too for turning out in force, and then having a dozen riders entered in SX2 and 10 in SX1 was great too. The junior 250s will kick on up into the SX2 class really soon, so that’s positive news going forward.”

The riders now head to the South Island for the final round of the series, to be hosted by the Southland Motorcycle Club at its Winton facility on December 15.

The Tokoroa event was supported by Craig Stevens Yamaha and the Winton event will be supported by Brent Scammell Honda.

Leading standings after round one of the New Zealand Supercross Championships (round two for the SX2 class) in Tokoroa on Saturday: