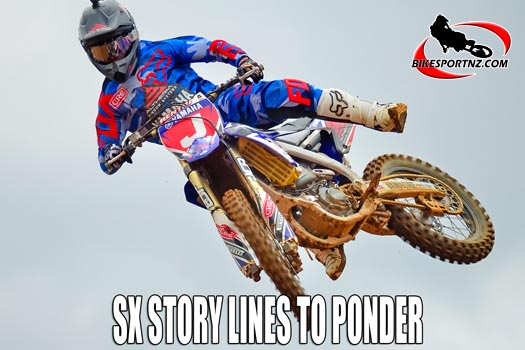 Here are possibly the top five story lines ahead of this Saturday evening’s S-X Open Auckland at Mt Smart Stadium and they are certainly interesting points to ponder.

The inaugural Monster Energy S-X Open International Supercross FIM Oceania Championship is set to be decided in New Zealand tomorrow. The Championship is comprised of both Sydney’s AUS-X Open, and New Zealand’s S-X Open, which both have attracted some of the biggest names in supercross. As it stands, Jason Anderson is the current series leader, but won’t line up in NZ. That means Dean Wilson is the effective leader, with Dan Reardon sitting just two points shy of the Scotsman. Third is Justin Brayton, with Australian Chad Reed slotted into position four. Clinching the first ever S-X Open Championship will be history making, and each rider will be intent on etching their name into the record books first.

The #22 of Reed hasn’t disappeared anywhere, so physically he isn’t returning, but metaphorically he will look to be back to his accustomed podium place position when he heads to the Southern Hemisphere. Reed struggled with bike set-up and small mistakes in Sydney, which hindered his overall result to just fifth after the conclusion of the Triple Crown format. On a positive note, Reed believes that the data collected in Qudos Bank Arena was invaluable towards his 2019 assault, also earmarking that New Zealand’s dirt will be very different to Sydney. Watch for Reed to rebound to the top, whilst also taking notes as he heads into 2019.

Typically, the dirt in New Zealand has been rather soft (and possibly very soft if the forecast rains arrive) in years past, which in turn offers the riders multiple ruts and line choices around the circuit. Juxtaposed to what the riders faced in Sydney, the New Zealand dirt will throw up a whole host of different challenges, with bike set-up and technique being very different. Riders will now have the ability to be more aggressive on the throttle, as traction shouldn’t be an issue. Later in the night however, if the ruts dig deep, they’ll become a completely new challenge. Ruts require ultimate commitment, particularly when they’re on the face of the a 75-foot-triple jump, so riders will need to pick a line and commit.

Former MX2 world champion Ben Townley will be at the S-X Open! The popular Kiwi will race for the ANZACs in the International showdown, pairing up with Chad Reed and Dan Reardon to take on Team USA. ‘BT’ is no stranger to supercross success, earning the 2007 East Coast AMA Supercross Championship, and really wants to see supercross grow in New Zealand following a slump in recent years. The NZ native attributes his success in international supercross competition to his access to a domestic championship and permanent track when growing up, which he hopes with the S-X Open being in Auckland with government backing will provide the springboard for the younger generation to come through.

Australian SX2 Champion Jay Wilson (pictured above), along with vice-champion Hayden Mellross, will both move up to the big bike category in New Zealand tomorrow. Wilson is set to pilot a Yamaha YZ450F with the help of Altherm JCR Yamaha Racing TEam boss Josh Coppins, and Mellross aboard a Husqvarna TC350, tuned by DPH Motorsport. Each rider will have no pressure whatsoever in terms of championship, and will want to put in a strong result in a bid to catch the eye of the factory teams who’ll be in attendance. Mellross ideally wants to head back stateside, and believes that a strong result in Auckland may generate interest from international teams. Dylan Wills also makes the leap, however he’ll ride his DPH Motorsport Husqvarna 250F against the 450s.

The schedule for Saturday: