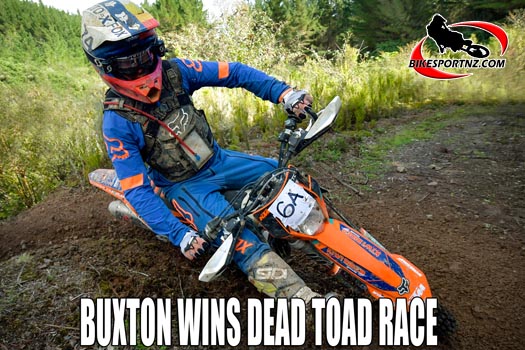 Auckland’s Tom Buxton has won the 2018 edition of the famous Dead Toad cross-country race and, at the same time, he has taken the lead in the popular GNCC Series.

The 20-year-old from Helensville took his KTM 350 EXC-F model bike to outshine more than 80 senior grade riders at the arduous two-hours-plus dirt bike race, set in a damp Riverhead Forest, west of Auckland, on Saturday.

Although considered a prestigious stand-alone event, the Dead Toad race tripled at the weekend as the second round of three of the Grand National Cross-country Series (GNCC) and also as the fifth round of six in the Paul Whibley-inspired NZXC Series.

Due to overseas commitments, Buxton did not contest all the earlier rounds of the NZXC Series, so this competition was not his main focus on Saturday, but he did race at the opening round of the GNCC Series in October, finishing third overall that day, and so, with his win at round two at the weekend, he now leads that parallel series.

The riders were set off in waves, with the premier XC1 class riders the first to be sent on their way. Buxton was among this bunch and found himself third on the track after the first 200 metres, just before the riders shot off into the trees.

“I was behind (Drury’s) Richard Sutton and (Tokoroa’s) Jake Wightman,” explained Buxton. “It was very slippery amongst the trees and I didn’t want to follow them for too long. I passed them both and took the lead after about the first kilometre.

“I got into a good rhythm and maintained a good pace to just hold that position and stayed there until the end,” said Buxton, who was eventually one of just 13 riders to complete six laps in the designated two hours, actually finishing in a time of two hours and 33 minutes.

Buxton crossed the line seven minutes ahead of the man who finished runner-up, Titirangi’s Callan May, the rider who is also his main rival for GNCC Series honours. Third overall was Cambridge’s Dylan Yearbury, with Wightman and Whanganui’s Seth Reardon rounding out the top five.

May had also finished runner-up at the opening round of the GNCC series last month, on that occasion behind Coatesville-based KTM rider Sam Greenslade.

“I’m in a good position now to win the GNCC Series. My aim now is to win the third and final round (at Waimiha, in the King Country, on December 8) and that will at least be something I can put in the bank this season, after being away overseas and not able to race much at home.”

He had led the New Zealand Enduro Championships after winning the opening two rounds of that six-round series in April, but then decided to follow his dream and head to the renowned annual Romaniacs hard enduro event in Romania, abandoning the domestic racing scene at home.

“I was working as a track manager at the Romaniacs event, so I wasn’t racing there, but it was a great way to gain insight about the event. I hope one day to race the Romaniacs, but it is pretty brutal and I’m really in no rush to do it. I’m young. I’ve got time on my side.”

The next major outing for Buxton is to tackle the two-day Enduro X and Nutbuster Enduro – a NZ Xtreme Off-Road Championship event – near Christchurch this coming weekend.

He will then prepare for the final GNCC race at Waimiha, before tackling the 2019 New Zealand Enduro Championships.