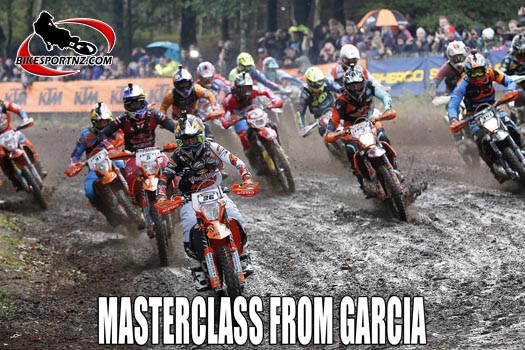 Spain’s Josep Garcia put on a motorbike masterclass to claim a start-to-finish victory at round six of the 2018 World Enduro Super Series at Hawkstone Park in Great Britain at the weekend.

Here is all you need to know:

– The opening day of racing saw the 650 competitors stretch their race legs on the sandy motocross track and surrounding woodland for fast and furious racing.

– He roared off the start line and built up a lead lap by lap to coast to a one-minute and 34-second margin of victory and his first win of the 2018 WESS series.

– It was a memorable race for British riders as fan favourites Watson and Bolt (Husqvarna) secured podiums with second and third respectively.

– Bolt’s third ensured that he takes the 2018 overall WESS lead into the seventh round of eight at the Gotland Grand National in Sweden from October 26-27.

– Garcia said: “My team were great, they let me know how much of an advantage I had so I was able to gauge the gap back to Nathan. I did have a couple of crashes, but thankfully it was nothing too serious.”

– Watson added: “I didn’t have enough left to go after Josep, but overall I am happy with my result and it’s great to get my first WESS podium.”

– Bolt revealed: “I started to crash a little bit, so just eased off and focused on claiming a safe third. The support from the fans was incredible. It’s fantastic to take the lead in the championship.”

Provisional WESS standings after round 6 of 8: