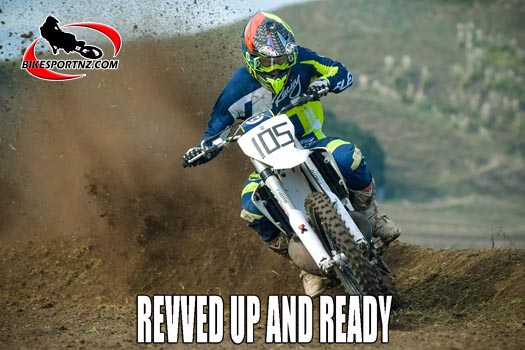 It’s the final count-down now for the Kiwi contingent heading to this year’s FIM Junior Motocross World Championships in Australia.

The event is set to blast off at Horsham, north-west of Melbourne, on the weekend of August 25-26, and New Zealand former motocross world champion Ben Townley believes one or two of the young New Zealanders entered have a good chance of achieving a podium position at this event.

Bay of Plenty man Townley, the FIM MX2 (250cc) world champion in 2004, knows a thing or two about competing at this level and he has been working hard over the past few months, working closely with three of New Zealand’s best title hopes – Oparau’s James Scott (aged 16), Taihape’s Hayden Smith (17) and Tauranga’s Brodie Connolly (14) – each of these riders set to line up in the premier 125cc class at Horsham.

“We have done a number of sessions together, focussing on their qualifying speed. This is an area that is all about numbers . It is a real challenge for the Kiwis because, in New Zealand, riders generally just have to show up to race but, in Europe and at GP level, there are huge fields and, if a rider is not fast at qualifying, he will miss out.

“The rider has to manage the intensity and put together one perfect lap and that’s easier to say than it is to do.

“James (Scott) is getting lots of international competition at the moment, so he will know about this.”

Scott will fly in from Europe, where he is currently in the midst of a gruelling European 125cc Motocross Championships (EMX125) campaign, and he is one New Zealand rider who could be expected to fancy his chances at Horsham.

“My expectations are high for Hayden (Smith, pictured here) too,” said Townley. “He is riding well at the moment and he is one of the older riders in the class.

“Brodie (Connolly) has just moved up to the 125cc class and, because of his age and size, he really needs more time to grow and get stronger. Although his speed is good, endurance and stamina might be a problem for him.

“This event could be a great stepping stone to a Grand Prix career and it’s really all in their own hands now.”