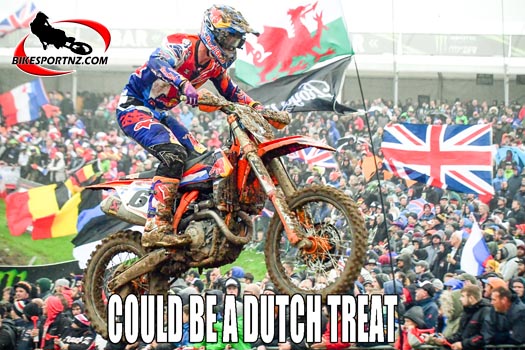 It could be a real Dutch treat at this year’s Motocross of Nations in the USA in October.

The Netherlands at the weekend named their team for the Michigan event, with the announcement that MXGP world championship leader Jeffery Herlings would captain the team.

Fellow MXGP rider Glenn Coldenhoff, currently seventh in the world standings, lines up alongside Herlings, but then things start to get interesting with Calvin Vlaanderen named at the team’s MX2 class rider.

Vlaanderen, a native of South Africa, is actually half Dutch, holding a Dutch passport and a Dutch license, although Motosport South Africa still want to claim him.

With Vlaanderen on the team, the Dutch feature three strong riders heading into the racing at Red Bud, Michigan on October 6-7.

Thanks to Herlings’ great performances, The Netherlands finished runner-up to France at the MXoN in both 2016 and 2017.

Leading the team in MXGP will be current national 450 points leader Eli Tomac. The reigning 450 Pro Motocross Champion returns to the event for the first time since 2014.

Tomac was sidelined from the MXoN with injury in 2015 and he opted out of the event for the last two years citing a long schedule (none of which has really changed), but he’s obviously a lot keener to race at home and in front of a largely supportive crowd.

Joining Tomac will be Justin Barcia, who is currently fourth in the 450 class standings in the AMA nationals.

Rounding out the team will be AMA Nationals 250 class points leader Aaron Plessinger. It will be his MXoN debut.